"Deterioration of good order and discipline" is an understatement 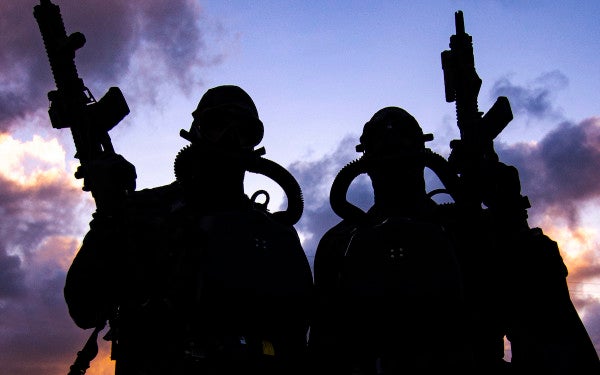 When the commander of Special Operations Joint Task Force Operation Inherent Resolve unceremoniously booted SEAL Team 7 out of Iraq this week, the U.S. Special Operations Command justified it “due to a perceived deterioration of good order and discipline within the team during non-operational periods.”

But according to an alarming new report in the New York Times, “deterioration of good order and discipline” seemed to be an understatement.

While the Navy initially indicated that an alcohol-soaked July 4th party was the core driver of the decision, a senior Navy official revealed to the New York Times' David Philipps that a senior enlisted platoon member had allegedly raped a female service member assigned to the SEAL platoon.

In addition, “when commanders began investigating the allegations, the entire platoon invoked their right to remain silent” under the Fifth Amendment, Philipps reports. “At that point, the official said, commanders decided to send the whole platoon home, including the lieutenant in command.”

When reached for comment by Task & Purpose, SOCOM spokesman Ken McGraw said the command was “unable to confirm the nature of any allegations that are currently under investigation.”

The alleged sexual assault and subsequent circling of the wagons appeared to be the last straw for SEAL Team 7. In July, SEAL Team 7 Chief Eddie Gallagher was found not guilty of murder after being accused of stabbing a wounded ISIS fighter to death in Mosul in 2017 while deployed there.

During the Gallagher trial, fellow SEAL Team 7 member SO1 Corey Scott claimed that he, not Gallagher, has executed the fighter. Scott had been offered immunity as a witness for the prosecution, and the Navy subsequently weighed perjury charges against him.

As Task & Purpose's Paul Szoldra previously noted, Gallagher's court-martial revealed that other members of SEAL Team 7 constructed a bar at their compound and were regularly drinking alcohol. Indeed, Gallagher's commanding officer is scheduled to go to trial in September.

This is all to say nothing of the cocaine abuse allegations currently roiling SEAL Team 10 and the fallout from the Mali hazing incident that resulted in the death of Army Special Forces Sgt. Logan Melgar at the hands of two members of SEAL Team 6. But according to a March 2018 Pentagon report to Congress, SOCOM doesn't see any problems with ethics and professionalism in its community.

“The SOF culture requires more than adherence to the minimum standards of compliance with applicable law and policy,” the report stated. “SOF personnel who manage violence under the stress and ambiguity of combat require the highest level of individual and organizational discipline.”

“This is more than just adherence to the Uniform Code of Military Justice and ethics regulations, the report added. “Rather, it is the cornerstone of the values system that trust and faith are built upon at every level within SOF.”