Two political veterans groups, one on the left, the other on the right, announced a new lobbying campaign aimed at ending America's 'forever wars.' 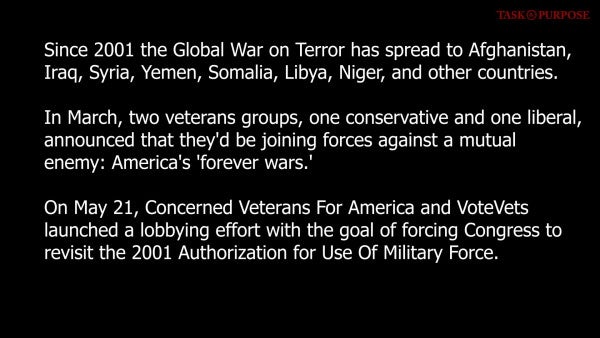 On Tuesday, two political veterans groups, one on the left, the other on the right, announced a new lobbying campaign aimed at ending America's 'forever wars.'

In a video tied to the announcement, Dan Caldwell, the senior adviser to Concerned Veterans for America, a conservative veterans' group, and Jon Soltz, the chairman of VoteVets, a liberal vets group which aims to get former service members into office, laid out their plan for a lobbying campaign aimed at changing policy on how the United States wages war.

Traditionally bitter political rivals, the two groups say they've found common ground in trying to end the myriad conflicts that fall under the Global War on Terror, what are colloquially referred to as America's 'forever wars.'

As Task & Purpose previously reported, the two groups' ultimate goal may be to see those conflicts end, but they say the starting point is to revisit the Post-9/11 Authorization for Use of Military Force, which allowed for the war in Afghanistan, then Iraq, and has grown to include conflicts with enemies that weren't even in existence at the time the initial authorization was passed — and all with little to no oversight from Congress, which is constitutionally responsible for declaring war.

CVA and VoteVets will hold a United for a Better Foreign Policy event on Wednesday, in Washington, which will include Republican and Democrat lawmakers for a discussion on U.S. foreign policy, and the 2001 AUMF.

“After almost two decades of fighting what is now America's longest war, it is past time we reexamine the status quo,” Nate Anderson, the executive director for CVA said in a statement.

“It is clear that politicians in Washington needs a push when it comes to re-balancing war powers and that, unless they get it, these forever wars will continue,” Soltz of VoteVets said in the statement. “That's why, even while we disagree on many other issues, we are joining forces on this one. The coalition we've formed, and the combined political strength that we bring, will change the debate and the political dynamic.”