"If you hear one thing, let it be this: don't trust Donald Trump with your kid's life or your own." 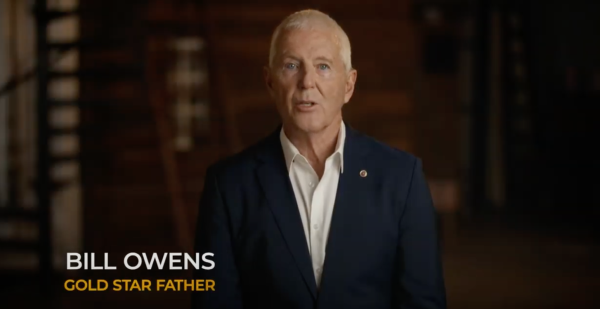 The father of a Navy SEAL who was the first American to die in combat under President Donald Trump has appeared in a political ad criticizing the commander-in-chief as someone not to be trusted.

The ad, released on Thursday by the progressive veterans' group VoteVets, features Bill Owens denouncing Trump's handling of the raid that resulted in the death of his son, Senior Chief Ryan “William” Owens and criticizing him over other issues.

“My son was the first person to die in combat under Donald Trump,” Owens, himself a military veteran, said in the video. “Just five days into his presidency, Trump ordered Ryan's SEAL team into Yemen. Not from the situation room with all the intelligence assembled, but sitting across a dinner table from Steve Bannon.

A message sent to Veterans For Trump from Task & Purpose went unanswered.

Five days after Trump took office in January 2017, the president's top national security advisors presented a plan for a raid on an Al Qaeda stronghold in central Yemen. They hoped the raid would result in the seizure of laptops and cellphones and lead to actionable intelligence, but instead “almost everything that could go wrong did,” as New York Times' journalists Eric Schmitt and David Singer put it in their Feb. 2017 account of the raid.

Ryan Owens, a 36-year-old sailor who had served in the SEALs for more than a decade, was killed in the ensuing gun battle.

“The death of Chief Petty Officer William Owens came after a chain of mishaps and misjudgments that plunged the elite commandos into a ferocious 50-minute firefight that also left three others wounded and a $75 million aircraft deliberately destroyed,” wrote Schmitt and Singer. “There are allegations — which the Pentagon acknowledged on Wednesday night are most likely correct — that the mission also killed several civilians, including some children. The dead include, by the account of Al Qaeda’s branch in Yemen, the 8-year-old daughter of Anwar al-Awlaki, the American-born Qaeda leader who was killed in a targeted drone strike in 2011.”

After Ryan's death, Bill refused to meet with the president and called for an investigation into what happened. The father also took issue with Trump seeming to shift blame for the loss of his son.

“This was a mission that was started before I got here,” Trump said in an interview with Fox News. “This was something that was, you know, just they wanted to do. They came to see me. They explained what they wanted to do, the generals, who are very respected. My generals are the most respected that we've had in many decades I believe. And they lost Ryan.”

In the ad, Owens said Trump “demeaned my son's sacrifice to play to the crowd” and had assailed the country's core values.

He also criticized the president's handling of the novel coronavirus (COVID-19) pandemic, which has killed more than 170,000 Americans since March.

“Two hundred thousand Americans will have died before we vote,” Owens said. “They and Ryan have one thing in common: It didn't have to be but for Donald Trump. If you hear one thing, let it be this: don't trust Donald Trump with your kid's life or your own.”

Despite the father's criticism, Owens' wife Carryn and their three children visited Trump privately at The White House in March 2017. Days prior, the president recognized Carryn during a joint address to Congress, saying that “Ryan's legacy is etched into eternity” as her eyes filled with tears.

Related: Trump To SEAL Widow: 'Ryan Died As He Lived: A Warrior And A Hero'