A group of special tactics airmen were honored with valor awards for their "selfless actions" during a series of raids carried out during a three-month deployment to Afghanistan, one of which resulted in the death of a top Al Qaeda leader in the region, 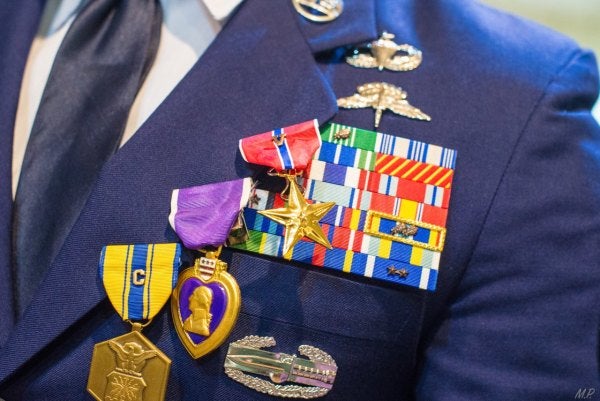 A group of special tactics airmen were honored with valor awards for their “selfless actions” during a series of raids carried out during a three-month deployment to Afghanistan, one of which resulted in the death of a top Al Qaeda leader in the region, officials announced this week.

The airmen, all Special Tactics Tactical Air Control Party specialists and certified Joint Terminal Attack Controllers, were honored in an awards ceremony at the Museum of the Mighty Eighth Air Force in Savannah, Georgia on Feb. 18, 2020, according to the release.

During their 105-day deployment in support of the Army's 75th Ranger Regiment in U.S. Central Command's area of responsibility, the group accomplished 129 direct action raids and 153 kinetic strikes while embedded with interagency partners — including one mission that was personally directed by President Donald Trump.

“During one mission, directed by the President of the United States, the force successfully killed the top al-Qaeda leader of the region, a victory commended by the President himself,” U.S. Air Force Col. William White, 720th Special Tactics Group commander, said at the ceremony. “These cumulative accomplishments pay tribute to the daily operating tempo of the troop as a whole.”

While it's unclear which specific Al Qaeda leader was killed in a 17th STS operation, the timing suggests it may have been Hamza Bin Laden, the son of Osama Bin Laden and “eventual heir to the leadership” of Al Qaeda, as The New York Times put it.

Among specific achievements of the airmen are those of Tech Sgt. Bryan Gartside and Staff Sgt. Zachary Sherwood, both of whom received Bronze Stars with 'V' devices for their individuals performances with the 17th STS Detachment 1.

Gartside received the Bronze Star for a July 2019 raid in which he exposed himself to enemy fire while calling in danger-close air strikes on enemy positions while his team was surrounded with overwhelming enemy fires.

“Throughout the battle, he continued to expose himself to identify enemy fighters and call in precise danger-close strikes eliminating enemy forces,” according to the release.

“Among the other recognized actions included one ST operator’s precise control of fires and preparation of landing zones for a casualty evacuation mission, which ultimately saved the life of a wounded Ranger as well as another Airman’s management of multiple aircraft and reconnaissance assets for 31 continuous hours, which proved instrumental in ensuring zero friendly casualties and 42 enemies killed in action,” per the release.

“As I took command of the 17th STS, Detachment 1 was just getting ready to deploy on this rotation. I had almost no time to ready the men or their families…“ Air Force Lt. Col. Travis Deutman said of the airmen during the awards ceremony, per the release. “…but reality is, they are always ready.