The January SEAL Team Six raid in Yemen proceeded despite overhead surveillance indicating the mission was compromised and ultimately did... 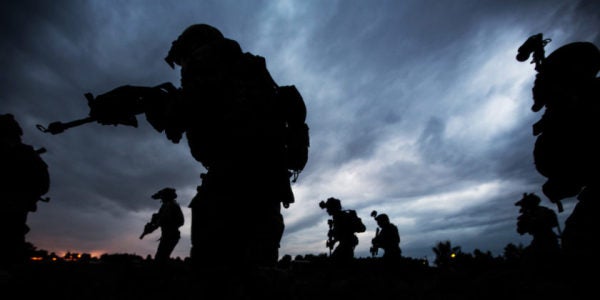 The January SEAL Team Six raid in Yemen proceeded despite overhead surveillance indicating the mission was compromised and ultimately did not yield significant intelligence for the counterterrorism campaign against al Qaeda in the Arabian Peninsula (AQAP), according to an investigation by NBC News released Oct 1.

NBC News published its report after speaking with “two dozen officials and special operations insiders” to unravel what went wrong the night of Jan. 29 and led to the death of Chief Petty Officer Ryan Owens. Sources told NBC News that the SEALs did not have enough time at the site to capture documents and electronics, calling into question past White House statements that the raid was a huge success that would save American lives and prevent future attacks.

Among other revelations in the report are details of the campaign against AQAP, coordination between the United States and United Arab Emirates, and retired Army Lt. Gen. Mike Flynn’s role in convincing President Donald Trump that risking the raid could distinguish him from his hesitant predecessor. According to NBC News:

According to two White House officials, Flynn told the President that a tip from the UAE indicated that one of the most wanted terrorists in the world, Qasim al-Rimi, the leader of AQAP, might be at the Yemen target. He had been sighted there previously.

Flynn said that capturing or killing al-Rimi would distinguish the president from Obama right out of the box, the sources said. Trump would be a risk taker where Obama was a hesitant and endless deliberator, Flynn said. And the president would be honor the Gulf allies who were operating in Yemen. Multiple sources say that Flynn labeled the first week raid a “game changer.”

The mission in the village of Yakla was officially designed to collect documents and electronics that would expose AQAP membership and concentrations. Unofficially, the raid presented an opportunity to go after AQAP leaders, like most wanted terrorist Qasim al-Rimi, the current emir of AQAP, who was supposedly at the location, according to Flynn’s UAE sources.

Al-Rimi was not at the location, although 14 AQAP fighters were killed. The raid also resulted in the death of Owens, the injury of five other service members, and the deaths of at least 16 Yemeni citizens, 10 of whom were under the age of 13.

Bill Owens, the father of fallen Chief Petty Officer Owens, expressed doubts about the necessity of the raid and frustrations with the White House’s insistence that the mission was a success.

“Don't hide behind the death of my son to try and justify that this raid was a success,” Owens, a Navy and Army Green Beret veteran, told NBC News. “Because it wasn't.”

The campaign against AQAP is ongoing as the United States continues to provide logistical and intelligence support to the Saudi Arabia-led coalition fighting the Houthis in Yemen. The civil war broke out in March 2015 as Houthis loyal to the former president began clashes with government forces. In January 2017, the United Nations reported that over 10,000 civilians had died in the conflict, according to the Associated Press.

On Sept. 27, a bipartisan bill was introduced in the House of Representatives to stop U.S. military assistance to the Saudi-led campaign and attempt to restore Congress’s constitutional authority to declare war.

In a statement released yesterday regarding the bill, Democratic Rep. Ro Khanna of California noted that the United States provides mid-air refueling for Saudi and Emirati warplanes conducting air strikes in Yemen and assistance with bomb targeting. The bombing campaign supports a blockade that prevents food and medicine from reaching the people of Yemen leading to a humanitarian crisis, according to the statement.

“It's beyond time for the country to stop conducting refueling for missions over Yemen. Congress and the American people know too little about the role we are playing in a war that is causing suffering for millions of people and is a genuine threat to our national security,” Khanna said.

The bill differentiates between support provided to the Saudi-led coalition in the civil war and the U.S. counterterrorism mission in Yemen, indicating drone strikes and raids against AQAP, like the Yakla mission, would continue.

“Ongoing counterterrorism operations will not be impacted. The resolution is solely focused on getting a vote on the unauthorized U.S. involvement in Yemen’s civil war between the Saudi-led coalition and the Houthi-Saleh alliance,” Khanna told Task & Purpose.

Khanna said increased U.S. support for the counterproductive and unrelated Saudi-led war has made efforts to pursue AQAP more dangerous and difficult.

Khanna is currently joined on the bill by two Republicans, Rep. Thomas Massie of Kentucky and Rep. Walter Jones of North Carolina, and 17 other Democrats.

“We must stop selling weapons and lending forces to Saudi Arabia, a country whose royals were complicit in funding 9/11 attacks,” Jones said in a statement. “As Congress has yet to authorize military force for hostilities between the Saudis and Houthis, America has no place being involved in that unconstitutional conflict.”

On Sept. 29, the United Nations Human Rights Council adopted a resolution to send experts to Yemen to investigate alleged human rights violations, according the the BBC.

Two weeks ago, the head of the United Nations Human Rights Middle East and North Africa office said 14 million people in Yemen are without reliable access to clean water and sanitation, according to the BBC. On Sept. 29, the International Red Cross announced that cholera cases in Yemen, exacerbated by the conflict, could reach 1 million by the end of the year, according to CNN.