Al Qaeda Claims To Be Fighting Alongside US Allies In Yemen

Remarks made by the leader of al Qaeda’s branch in Yemen during a recent interview seem to suggest that the... 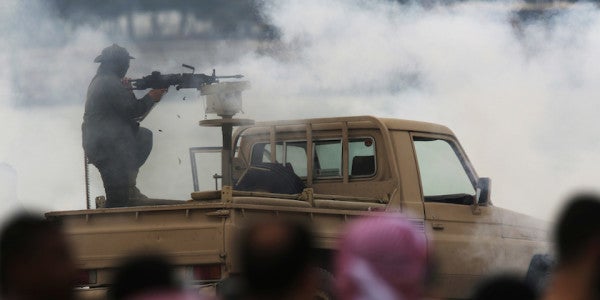 Remarks made by the leader of al Qaeda’s branch in Yemen during a recent interview seem to suggest that the terrorist group is fighting alongside U.S.-backed forces in the country, the Associated Press reports.

The group, known as al Qaeda in the Arabian Peninsula, or AQAP, is an offshoot of the global terror network responsible for the 9/11 terror attacks and has been linked to numerous terrorist attacks outside Yemen, including the 2013 Boston Marathon bombing and the 2015 Charlie Hebdo massacre in Paris.

AQAP’s leader, Qasim al-Rimi, told the group’s media arm on April 30 that his fighters had partnered with various militant factions aligned against Shiite rebels. The rebels, known as Houthis, drove the government of President Abed Rabbo Mansour Hadi from the country’s capital, Sanaa, in late 2014, triggering a bloody civil war that has killed more than 10,000 civilians to date.

Hadi is backed by a coalition of mostly Sunni Arab countries led by Saudi Arabia, which began deploying ground forces to Yemen in 2015 to bolster its massive air campaign against the Iran-backed Houthis. A recent analysis of the conflict found that the coalition launched more than 8,600 air attacks in Yemen between March 2015 and August 2016, and that nearly half of them hit civilian targets.

“We fight along all Muslims in Yemen, together with different Islamic groups,” al-Rimi said in the interview. Among the factions he named were the ultraconservative Salafis, the Muslim Brotherhood, “and also our brothers among the sons of [Sunni] tribes.”

If al-Rimi’s claims are true, Washington would be inadvertently aiding an organization that is considered a major threat to the United States. As key allies of Hadi, the Muslim Brotherhood and Salafis are funded and armed by the Saudi-led coalition, which the United States directly supports with arm sales, refueling of aircraft, and intelligence, according to Newsweek.

Al-Rimi, who became AQAP’s leader in 2015, is a prolific jihadist. He joined al Qaeda in the 1990s and is credited with being the mastermind behind a suicide bombing in 2007 that killed eight Spanish tourists in Yemen, as well as an attack on the U.S. Embassy in Sanaa on Sept. 17, 2008. Al-Rimi is on the U.S. most-wanted list with a $5 million reward for his capture.

AQAP is the chief target of U.S. military operations in Yemen and the group has sustained significant casualties as a result of American airstrikes, which have increased in intensity since the inauguration of President Donald Trump, according to the AP.

In late January, during the first counterterrorism raid authorized by Trump, Chief Special Warfare Officer William “Ryan” Owens, a Navy SEAL, was killed in battle with AQAP militants in Yemen. Owens was the first and only American service member to die while conducting operations against the group.