A “small number” of U.S. military personnel backed by American warplanes are assisting thousands of Yemeni government troops in a... 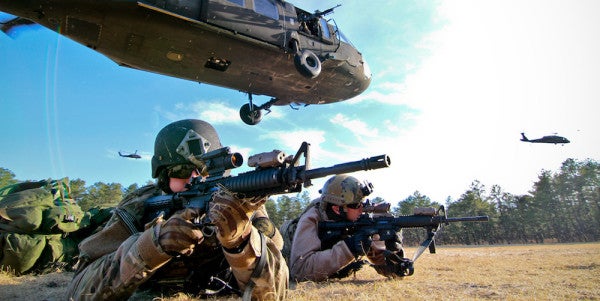 A “small number” of U.S. military personnel backed by American warplanes are assisting thousands of Yemeni government troops in a major offensive to expel militants associated with the country’s Al Qaeda offshoot from their de-facto capital, the Department of Defense told Military Times on August 4 — the largest military operations conducted against the terror network in more than a year.

The assault, backed by United Arab Emirates personnel and U.S. special operations forces, aims to finally eliminate fighters for Al Qaeda in the Arabian Peninsula from the central Yemeni city of Al Mukalla, the New York Times reports. The port city of 500,000, the site of another government offensive in April 2016, has served as a staging ground for the terror network’s violent incursions into Yemen’s south during the country’s ongoing civil war, which erupted in 2015.

“U.S. forces are supporting regional CT partners in ongoing operations in Yemen against AQAP to degrade the group's ability to coordinate external terrorist operations and use Yemeni territory as a safe space for terror plotting,” a Pentagon spokesman told Task & Purpose. “Eliminating AQAP, as well as Islamic State influence from the region, will significantly degrade extremist activity in the area to set conditions for stabilization efforts in Yemen.”

In this Wednesday, Jan. 6, 2010 file photo, an anti-terrorist unit from the Central Security Forces of the Ministry of Interior trains in the Sarif area on the eastern outskirts of the capital Sana, in Yemen.Photo via Associated Press

The announcement is the latest in a series of gradual escalations of U.S. military involvement in the war-torn country under the Trump administration. Shortly after his inauguration, a costly raid by U.S. special operations forces left one Navy SEAL dead and three more injured, provoking criticism that Trump and the Pentagon had hastily ordered the operation “without sufficient evidence.” (Army Gen. Joseph Votel, the head of U.S. Central Command, told the Senate Armed Services Committee in March that he takes “full responsibility” for the fatal January operation.)

Since then, the DoD has turned up the heat on AQAP. Starting weeks after the tragic raid, U.S. Central Command conducted an average of one airstrike a day for more than a month against AQAP targets in Yemen, with 74 total — a bombardment rate that DoD spokesman Davis told the Washington Post on Aug. 4 “remains little changed in past weeks.” And in May, Navy SEALs conducted CENTCOM’s first acknowledged special operations forces raid in the country since the January tragedy, killing seven AQAP militant with close-air support from an AC-130 gunship.

When asked about White House involvement in the new Al Mukalla offensive, a Pentagon spokesman told Task & Purpose that the president “has authorized U.S. Central Command to conduct counterterrorism operations in Yemen.” It was Votel, not Trump, who had authorized the May SEAL raid.

Related: Al Qaeda Claims To Be Fighting Alongside US Allies In Yemen »

The Trump administration has accelerated airstrikes against various terror groups (Western warplanes released 4,848 munitions as part of Operation Inherent Resolve in June alone, the highest monthly rate since the operation began in 2014, according to CENTCOM), and the Pentagon has increased its reliance on SOCOM to conduct ground operations in fertile battlefields of Yemen and Somalia. And with good reason, according to DoD commanders: AQAP, thriving amid the chaos of Yemen’s civil war while other branches falter across the Middle East and North Africa, “poses the most imminent terrorist threat” to the United States, as the New York Times put it.

“AQAP has leveraged the political chaos and security vacuum in Yemen to seize military garrisons, government offices, ports, and energy facilities in the southeastern part of the country and establish a de-facto headquarters in the coastal city of Mukallah,” Votel told the Senate Armed Services Committee during his nomination hearing in March 2016. “AQAP has used these strongholds to generate funds on the order of millions of dollars, enabling the group to co-opt large portions of the local populace, improve weapons stockpiles, enhance recruitment and training initiatives, and seize additional territory.

“If we do not deal with AQAP,” he added, “it is only a matter of time before the group uses its expanded capabilities and safe haven to attempt another attack against the U.S.”