Depending who you ask, the first military operation authorized by President Donald Trump — a daring ground raid in Yemen... 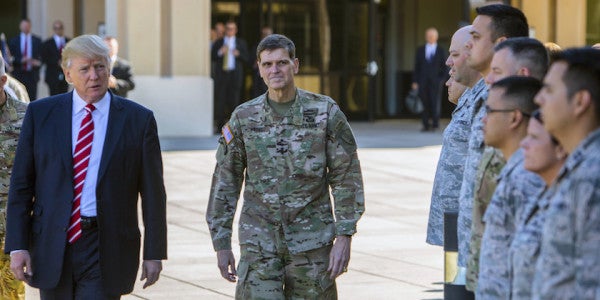 Depending who you ask, the first military operation authorized by President Donald Trump — a daring ground raid in Yemen that cost the lives of a Navy SEAL and a disputed number of civilians — was either a tragic failure or a laudable success. While the White House has held firmly to the latter assessment, Trump insists that it was his generals, not him, who were ultimately responsible for what transpired in the village of al Ghayil on a moonless night in late January. Now, one of those generals has stepped up to own it.

Army Gen. Joseph Votel, the head of U.S. Central Command, told the Senate Armed Services Committee on Thursday that he accepts “full responsibility” for the raid, an assault on a compound that U.S. officials had identified as a headquarters for Al Qaeda in the Arab Peninsula, or AQAP. Chief Special Warfare Operator William “Ryan” Owens was killed in the hourlong battle that erupted when the commandos entered the village. A $90 million MV-22 Osprey was also destroyed after a hard landing disabled it.

He added: “We lost a valued operator, we had people wounded, we caused civilian casualties, lost an expensive aircraft.”

Still, Votel said he was “satisfied” after internal investigations found that the raid’s bloody outcome was not the result of “incompetence or poor decision-making or poor judgement.” He also said that the raid yielded “some valuable information that will be helpful for us.”

On Feb. 2, White House Press Secretary Sean Spicer gave a similar assessment of the Yemen op. “It’s hard to call something a complete success, when you have the loss of life or people injured,” he said, “but I think when you look at the totality of what was gained to prevent the future loss of life…it is a successful operation by all standards.”

The number of civilian casualties has been fiercely disputed. Initially, reports from medics at the scene put the number around 30, while the Pentagon acknowledged that civilians were killed but didn’t specify how many. Yesterday, Votel told lawmakers that a “determination based on our best information available is that we did cause casualties, somewhere between 4 and 12 casualties that we accept, I accept responsibility for.” Among the civilians who died was the 8-year-old daughter of the late Yemeni-American terrorist Anwar al-Awlaki.

Since the raid, the U.S. military has ramped up operations in Yemen, which is embroiled in a vicious civil war between rebel groups and government forces. More U.S. bombs have been dropped in Yemen in the past week under President Trump than in any year of President Obama’s tenure, according to Foreign Policy. Those operations have included nearly 40 airstrikes targeting AQAP leadership, Military Times reports.

According to the independent news site Bellingcat, AQAP has been involved in multiple plots to attack Western targets outside Yemen, and was complicit in both the 2013 Boston Marathon bombing and the 2015 Charlie Hebdo massacre.