The Pentagon Is Raining Hellfire Down Upon Al Qaeda In Yemen

On Monday, the Pentagon announced that the U.S. military has conducted approximately 20 airstrikes against al Qaeda militants in Yemen... 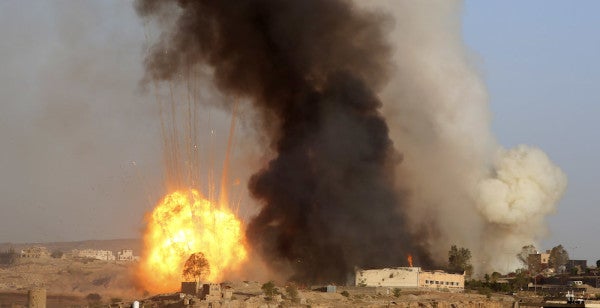 On Monday, the Pentagon announced that the U.S. military has conducted approximately 20 airstrikes against al Qaeda militants in Yemen since the middle of last week, putting the total number of strikes carried out against terrorists in that country at more than 70 in just over a month.

This recent barrage of airstrikes, which commenced on Feb. 28, is aimed at degrading and destroying the “infrastructure, fighting positions and equipment” of the militant group, which many U.S. officials consider the most dangerous branch of the decentralized al Qaeda terrorist network.

“We continue to target in Yemen, and this is done in the interest of disrupting this terror organization that presents a very significant threat to the United States,” Pentagon spokesman Capt. Jeff Davis told members of the media, according to The Hill.

The news marks a relative increase in airstrikes conducted by U.S. military forces under the Trump administration. As Micah Zenko at the Council on Foreign Relations points out, President Barack Obama — widely regarded as the executive branch’s first “drone president” — carried out some 542 airstrikes over 2,920 days in office, or one strike every 5.4 days. This week’s barrage of strikes marks 74 drone strikes in 74 days — one a day.

The increase in drone strikes also came several weeks after a small team of Navy SEALS conducted a costly raid into Yemen that left one SEAL dead and three more injured, provoking criticism from both civilians and U.S. military officials that President Trump had ordered the raid “without sufficient evidence,” as Reuters reported at the time. (Army Gen. Joseph Votel, the head of U.S. Central Command, told the Senate Armed Services Committee in March that he takes “full responsibility” for the botched operation.)

While reports of civilian deaths in U.S. airstrikes in Iraq and Syria have raised serious questions regarding the Pentagon’s use of drones to beat back Islamic militants abroad, the Trump administration has moved to loosen restrictions on aerial bombardments, particularly a 2013 directive that required multiple federal officials to evaluate strikes for potential collateral damage to innocent civilians.

In early January, just before Trump took office, a U.S. airstrike killed senior al-Qaeda leader Abd al-Ghani al-Rasas in Yemen. “This operation is an example of the U.S. government and our allies' commitment to the people and the government of Yemen to detect, deter, disrupt and defeat violent extremists who threaten progress in the region,” said then-Pentagon press secretary Peter Cook. From the looks of it, the Trump administration plans on making good on that commitment.