Pentagon Run-Down: I Am Not Muqtada al-Sadr Edition

Your friend and intrepid Pentagon correspondent recently heard this while talking to a colleague: “You DO look like Muqtada al-Sadr!”... 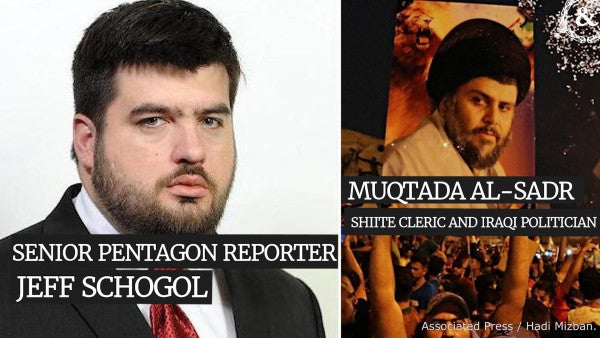 Your friend and intrepid Pentagon correspondent recently heard this while talking to a colleague: “You DO look like Muqtada al-Sadr!”

Yes, since the hipsters at Task & Purpose’s audio-visual crew made a video that mentioned yours truly bears a striking resemblance to the anti-American Shiite cleric Muqtada al-Sadr, folks have suddenly noticed that T&P;’s own Pentagon reporter could pass as Murray al-Sadr, the younger and more collegial brother of Mookie.

It’s true that we both have the same beard, the same scowl, the same eyebrow, and the same need for expandable waist pants, but that’s where the similarities end. Half of this reporter’s family is Jewish, and your correspondent is pretty sure that the Shiite militias that Sadr leads as well as Sadr’s Iranian and Saudi allies have a “zero tolerance policy” towards Pro-Semitism.

This is not the first time your humble reporter has been told he looks like a bad guy. A Special Forces soldier once told this correspondent that he resembled American Taliban Johnny Walker Lindh, whom he helped capture in 2001 – in all fairness, your naïve narrator had just asked him, “What do you mean SEALs aren’t Special Forces?”

Yet there is no denying that this reporter could be Muqtada al-Seder, the Shiite cleric’s half-Jewish look-alike. Retired Army Lt. Gen. Mark Hertling instantly saw the resemblance when your burly reporter arrived at Fort Jackson, South Carolina, in 2011 to take the Army’s new combat fitness test.

At the time Hertling was deputy commanding general for Initial Military Training and your correspondent worked for Stars and Stripes. Sporting a magnificent gut and wearing a skin-tight tan wicker shirt, this reporter looked like he hit his physical prime during the Reagan years.

Hertling, who had led U.S. troops in northern Iraq, recalled to Task & Purpose what happened next:

“There were a bunch of drill sergeants and we were all standing around talking about the press being there and I actually said to a couple drill sergeants, ‘Is it me or does Jeff Schogol look like Muqtada al-Sadr?’ And they all kind of laughed. One of the drill sergeants, who had been with me in the 1st Armored Division, said, ‘Sir, I was just thinking the same thing.’”

For the record, this reporter has never met Sadr and does not plan to start an anti-American militia. However, your correspondent’s weak performance on the combat fitness test – in which he failed to do a single “rower” sit-up – only reinforced the similarities between the two of us.

“You performed on the test as well as I thought Muqtada al-Sadr would have done,” Hertling said.