Disaster strikes the Pentagon as Popeyes runs out of chicken sandwiches

A sign near the counter announced the scope of the disaster: "We out classic and spicy chicken sandwich," read the sign. 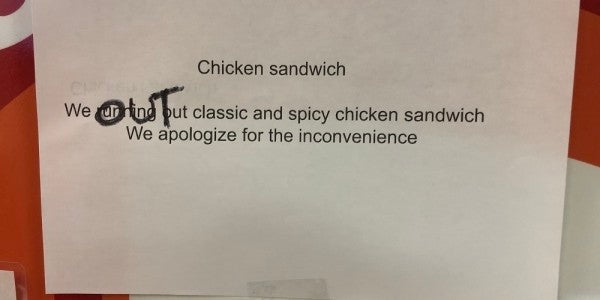 On Friday, the Brazilian rainforests were burning, the stock market was plunging, and the international dispute between the United States and Denmark over Greenland ground on; but the real crisis in the Pentagon was that the Popeyes Louisiana Kitchen in the building's food court had run out of chicken sandwiches.

In retrospect, the chicken sandwich shortage should have been expected. On Aug. 12, Popeyes tweeted that its new grilled chicken sandwich would be better than sex: “Chicken. Brioche. Pickles. New. Sandwich. Popeyes. Nationwide. So. Good. Forgot. How. Speak. In. Complete. Sandwiches. I mean, sentences.”

Since then, the country has been captivated in a chicken sandwich craze. One Maryland man reportedly offered to sell his day-old Popeyes fried chicken sandwich for $138.52, which included delivery costs. (Not since Claire reunited with Jamie in Season 3, Episode 6 of “Outlander” has the world seen the raw expression of carnality.)

Still, Pentagon reporters expressed shock and frustration on Friday that the beloved Pentagon restaurant in the five-sided fast food center had no more chicken sandwiches to provide to patrons.

“How can this country espouse to support the troops if there are no chicken sandwiches at the Pentagon's @PopeyesChicken?” tweeted Valerie Insinna of Defense News.

Your friend and humble narrator was largely ignorant of the catastrophe until his boss alerted him to the proverbial shit going down.

This reporter stealthily approached the Pentagon Popeyes disguised as a hobo who had spent the following evening passed out on the subway whilst soaked in his own urine – in other words, I looked like I always do.

A sign near the counter announced the scope of the disaster: “We out classic and spicy chicken sandwich,” read the sign.

The word “out” had been handwritten in black pen over the typed words “running out,” indicating the speed at which chicken sandwiches had been ravenously consumed.

Your intrepid correspondent was referred to Popeyes' corporate office as to the reason why this Messiah of all things fried did not have enough fish and loaves for the multitude.

Alas, yours truly has not received a response thus far.

Twitter users reported that patrons had sought a sukkah in the nearby Pentagon City mall Popeyes – although the lines were long.

“My colleagues went to the pentagon city mall and bought 13 sandwiches, sorry if they're out,” tweeted Lauren Fish, a strategy consultant. “They waited at least 40 minutes. Solid move for the rest of us.”

This reporter confirmed that chicken sandwiches were still available at the mall restaurant but was unable to glean any further information.

Frankly, the whirlwind of events Friday in the Pentagon food court has left this reporter both shocked and awed.

The greatest military in the history of the world cannot focus on increasing lethality and winning multi-domain conflicts if it is deprived of the fried masterpiece that Nostradamus predicted in this quatrain: “From Louisiana will come a chicken breast / Accompanied by a fluffy bun / The arteries will be clogged like the sewers of Malta / The calories shall be fourteen thousands five hundred and seventy-three.”