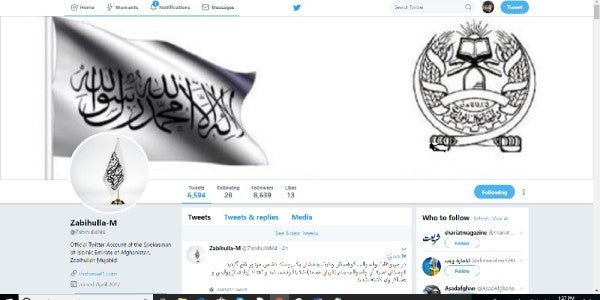 Shortly after the Marine Corps commandant declared, “We're the Mujahideen,” Task & Purpose’s Pentagon correspondent went full Charlie Wilson by calling out the Taliban on Twitter, but Twitter doesn’t seem to care that it is giving a platform to a violent extremist group.

The U.S. government has classified the Afghan Taliban as a “Specifically Designated Terrorist Entity” since 2002, a State Department official told Task & Purpose.

“As a result of the designation, all property subject to U.S. jurisdiction in which the group has any interest is blocked, and U.S. persons are prohibited from engaging in any transactions with them or to their benefit,” the official said in an email.

Yet the Taliban’s chief spokesman Zabihullah Mujahid is on Twitter – with 8,639 followers – and so are several fellow travelers. During a recent Twitter exchange over the commandant’s comments, one Taliban cheerleader suggested that this reporter doesn’t have a penis: “With all these gender movements in the US, I do not know if you actually are a man or some other weird creature.”

Lost in the name calling is a larger question: Why does Twitter allow the Taliban to continue to use its product when the company’s own policy bans “violent extremist groups”?

A company spokeswoman offered little insight, telling Task & Purpose on May 7, “I am unable to comment on individual accounts, for privacy and security reasons.” The spokeswoman referred T&P; to Twitter’s policy on violent extremist group.

It looks like the Taliban will be tweeting for the foreseeable future, but your friendly Pentagon correspondent will continue to meet the bully on the middle school playground that is Twitter, reminding Zabihullah Mujahid that, “If I had a dog as ugly as you, I would shave its ass and teach it to walk backwards.”

Comments or thoughts to share? Send them to Jeff Schogol via email or direct message @JeffSchogol on Twitter.