As 2018 draws to a close, there is precious little evidence that your humble Pentagon correspondent can cite as progress... 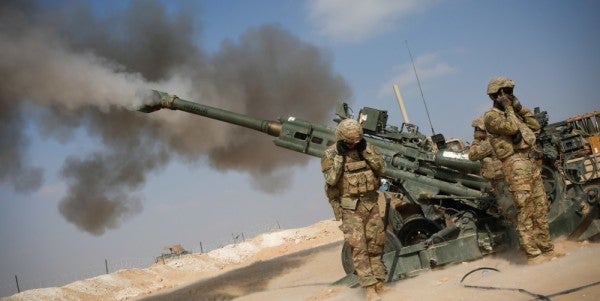 As 2018 draws to a close, there is precious little evidence that your humble Pentagon correspondent can cite as progress in the U.S. military’s efforts to annihilate ISIS and force the Taliban to negotiate peace with the Afghan government.

The United States’ Kurdish and Arab allies in Syria have failed to crush ISIS’ enclave in the Middle Euphrates River Valley, in part because Turkey has made it clear it will not accept a Syrian Kurdistan.

Meanwhile, the Taliban are “not losing” in Afghanistan, Chairman of the Joint Chiefs of Staff Marine Gen. Joseph Dunford said in November. Even retired Army Gen. Stanley McChrystal, former commander of all U.S. troops in Afghanistan and Jedi Knight of counterinsurgency, couldn’t come up with a better plan than, “Keep a limited number of forces there and just kind of muddle along.”

Perhaps not surprisingly, the U.S. military’s official position is that things are not as bleak as this reporter sees them. ISIS still controls less territory now than it did at the start of 2018, and the Taliban agreed to a temporary cease fire with the Afghan government for the first time ever, Navy Capt. Bill Urban, a spokesman for U.S. Central Command, told Task & Purpose.

“We are closer now than ever before to a political settlement with the Taliban,” said Army Maj. Maj. Bariki Mallya, a spokesman for U.S. military operations in Afghanistan.

However, no one is celebrating victory either. The Marine three-star general who has been nominated to lead U.S. Central Command recently told lawmakers that ISIS will continue to have a presence in Syria for some time.

“The enduring defeat of ISIS is not going to be the absence of ISIS,” Marine Lt. Gen. Kenneth McKenzie Jr. said at his Dec. 5 confirmation hearing. “ISIS, if defeated in the lower Euphrates river valley, is going to transition to an insurgency, and there are going to be continued attacks from ISIS and derivatives of ISIS both in the region and really globally.

“Our goal would be that those attacks, typically, would be of an intensity and a scope where they’d be able to be contained by local forces that would not necessarily require our assistance. It’s getting to that point, but I want to emphasize that – for a while – it won’t be pretty; it won’t be silent; there will be pockets that are going to continue to crop up.”

McKenzie also estimated the Taliban had 60,000 fighters, but analyst Bill Roggio puts the Taliban’s strength at more than 100,000. To put those figures in perspective: The Red Army faced 82,300 full-time fighters out of a total force of 173,000 Mujahedeen by the end of 1988, according to Soviet historian Maj. Gen. Alexander Antonovich Lyakhovsky. (Remember when we laughed at the Russians for spending a decade in Afghanistan? That seems like the Gulf War compared to the current conflicts.)

Ambassador Zalmay Khalilzad, U.S. Special Representative for Afghanistan Reconciliation, is trying to strike a peace agreement between the Taliban and the Afghan government – which the Taliban refuse to recognize.

But NBC has reported that Khalilzad is moving quickly because State and Defense Department officials believe President Trump plans to withdraw all U.S. troops from Afghanistan before the 2020 presidential elections.

When asked about the story, an administration official did not elaborate on what the president’s future plans for Afghanistan are, telling Task & Purpose: “We are constantly refining and adjusting our strategy with the ultimate objective of reaching a political settlement that ends the conflict and ensures the country never again serves as a safe haven for terrorists.”

To get an outsider’s perspective of what’s going well and what’s not, your friend and humble Pentagon correspondent reached out to retired Col.Steve Leonard, a former Army strategist and author of the “Doctrine Man” cartoon.

Overall, the U.S. military is doing a better job fighting ISIS than it is the Taliban, said Leonard, who teaches at the University of Kansas’ business school.

The fact that ISIS remains contained in a small pocket inside Syria is a success in itself, especially when compared with how much territory the terrorist group controlled a couple of years ago, he said.

“The problem with ISIS is that we're down to trying to kill an idea, and what's left of them probably won't give up alive,” Leonard told Task & Purpose. “They don't really represent much of a threat at this point, so would it be wiser to contain what's left and focus efforts elsewhere? I also think that a clearer understanding of the broader regional strategy might be helpful, and ISIS is only one part of that.”

When it comes to Afghanistan, it seems that no one can say what the U.S. strategy is anymore, Leonard said. The main rationale why the U.S. military has remained has been to prevent terrorists from re-establishing their base in the country, yet terrorists have their pick of developing nations that would serve their purposes just as well.

If the United States is committed to helping Afghanistan become responsible for its own security, then leaders need to examine how much such an enterprise would cost in terms of money, people, and time, he said.

“We have the resources, but it would take generations to achieve a secure, stable, self-sufficient state, with Taliban opposition throughout,” Leonard said. “Remove the Taliban and you might save yourself a generation.”

“Rather than ask why we haven't made progress against the Taliban in the past year, ask what would be different if we left Afghanistan today or 10 years from today,” he continued. “Probably not much.”