The retired Army colonel who was instrumental in driving recent direct talks between the United States and the Taliban to... 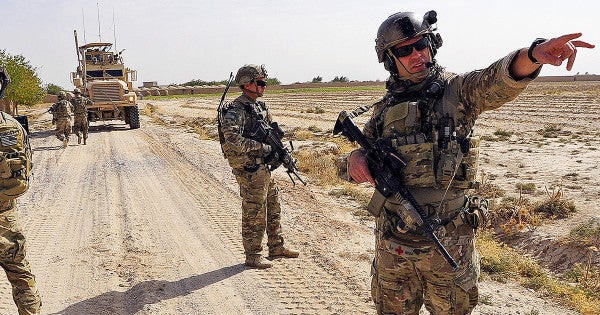 The retired Army colonel who was instrumental in driving recent direct talks between the United States and the Taliban to end the war in Afghanistan says that “a common enemy” in ISIS may be what helps end the conflict.

“The fear of Afghanistan becoming the next Syria and that their battlefield gains are coming to a close suggests to them that this is a good time to negotiate,” Christopher Kolenda recently told ABC News Australia.

In November, Kolenda and former diplomat Robin Raphel traveled to Doha, Qatar to meet with Taliban representatives. Now it seems that this opening in the nearly 17-year-old war could eventually yield some kind of negotiated settlement.

To be clear, Kolenda's initial trip was not explicitly sanctioned by the U.S. government, although he worked on previous negotiations under the Obama administration. However, Kolenda said recently it was rumored that U.S.-Taliban talks would continue in early September (Taliban officials met with Alice Wells, the State Department’s senior South Asia diplomat, in July, according to the New York Times).

In the ABC interview, Kolenda explained that present-day Afghanistan is much more complex than it had been in the past. Instead of the Taliban fighting the Afghan government and its U.S. backers, it now contends with an ISIS affiliate and others jockeying for power.

The concern of the Taliban, he said, was that Afghanistan could eventually experience a “descent into chaos” similar to that of the 1990s, with various warlords and militia groups locked in a constant battle for territorial control, or morph into a similar outlook as the Syrian civil war.

“That's why they are so interested in exploring a productive peace process,” he said, adding that ISIS is a common enemy of the Taliban, the Afghan government, and the United States.

The Taliban has been fairly clear in its goals, which first and foremost has meant to end the occupation of Afghanistan by foreign troops. But as Kolenda explained, that position doesn't necessarily mean U.S. troops would be required to walk out of Afghanistan immediately with their heads down.

Here's what he told Voice of America:

“There’s a lot of nuance here that I think is very important. What they’ve said consistently, and this goes back to 2010, is that if a government formed after a political settlement, which presumably would include Taliban leaders, decides that they would like international troops to train Afghan security forces, then that’s a decision that a legitimate, inclusive government can take.

Now the corollary to that, which is also very important, is that if a government, post-political settlement, said, ‘We don’t want foreign troops here at all,’ then there would be an expectation that foreign countries would respect that decision and their foreign troops would go.

So I think it’s really important to understand this more holistic point of view. Their No. 1 reason for war — their casus belli, if you will — is the occupation. So they’re not going to just simply say, ‘We’re OK with U.S. combat troops running around Afghanistan.’ Because that’s what they’re fighting to prevent, from their point of view.”

You can listen to the full radio interview with Kolenda here.