Your friendly Pentagon correspondent had a great idea for this Run-Down: Drinking too much coffee and eating MREs with chili... 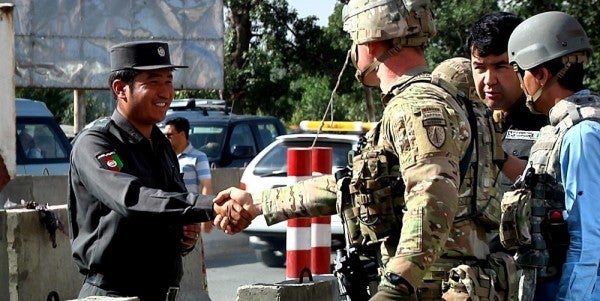 Your friendly Pentagon correspondent had a great idea for this Run-Down: Drinking too much coffee and eating MREs with chili and other spicy entrees can leave service members with hemorrhoids that sing louder than Beyonce.

Two recent news stories caught this correspondent’s eye: NBC News uncovered that the State Department has begun direct talks with Taliban representatives in the hopes of eventually starting formal peace negotiations; and the New York Times reported that the U.S. military is urging Afghan troops and police to withdraw from rural areas of the country – essentially conceding territory to the Taliban.

Army Gen. John Nicholson, the top U.S. military commander in Afghanistan, refuted a separate media report that the United States is ready to begin direct talks with the Taliban, but the U.S. government is prepared to help, “support, facilitate, and participate in these discussions.” (It’s worth noting that Nicholson only speaks for the U.S. military in Afghanistan, not the State Department, so it is possible other U.S. government officials are setting the stage for actual peace talks with the Taliban.)

Unfortunately, this reporter learned bupkis when Task & Purpose asked the U.S. government and the Taliban about the talks reported by NBC. (“Bupkis” is a Yiddish word that is loosely translated as, “Information about as useful as the proverbial fart in the wind.”

“Any negotiations over the political future of Afghanistan will be between the Taliban and Afghan government,” a State Department said.

“Thanks, we cannot say anything about this until now,” Taliban spokesman Zabihullah Mujahid told T&P.;

This reporter was a little surprised to hear from Mujahid because yours truly kinda, sorta, trolled the Afghan Islamic fundamentalist group earlier this year when a U.S. airstrike obliterated 28 Taliban fighters near Farah city. Perhaps they got over it because they realize the value of talking to reporters.

As for the situation on the battlefield, the U.S. military is encouraging Afghan troops and police to be less reliant on checkpoints and take the fight to the Taliban, said Army Lt. Col. Martin O’Donnell, a spokesman for Operation Resolute support.

Moreover, O’Donnell disputed that Afghan troops would cede any ground to the Taliban by consolidating their checkpoints.

“In fact, closure of isolated and/or vulnerable checkpoints (not all checkpoints), simplifies logistics and strengthens the offensive and defensive posture of the Afghan National Defense and Security Forces,” said Army Lt. Col. Martin O’Donnell.

“It frees up Afghan security forces for offensive operations like those previously described, and prevents the enemies of Afghanistan from overrunning them and gaining an eye-catching, but strategically inconsequential headline,” he added.

The Afghan war has gone on for 17 long years. When it started, people used their cell phones to actually call other people – something that is too hard to imagine now. Veterans have expressed dismay that the United States has been unable to defeat the Taliban in that time.

Under the Obama administration, the U.S. government stopped trying to win the war in Afghanistan, said Bill Roggio, a senior fellow with the Foundation for the Defense of Democracies. The Afghanistan surge, which had an expiration date as soon as it was announced, failed to vanquish the Taliban.

But even though the Taliban still control and operate in a substantial part of rural Afghanistan, they do not have the upper hand, said Scott DesMarais, an Afghan researcher with the Institute for the Study of War.

The combination of U.S. airpower and Afghan special operations forces are currently preventing the Taliban from capturing and holding any population centers, DesMarais said. While the Taliban can still launch spectacular attacks in Kabul and other areas, they quickly retreat afterwards.

“Further, the Eid-al Fitr ceasefire demonstrated a widespread desire for peace among rank-and-file Taliban,” he added. “Taliban leaders are reportedly aware of this desire for peace and could be pursuing negotiations with the U.S. because they realize their fighters are fatigued from nearly two decades of war.”

All of the above is interesting, but it doesn’t answer the fundamental question at hand: How will the Afghanistan war finally end? The United States used to laugh at the Soviets for spending almost nine years in Afghanistan, and soon U.S. troops will have spent twice as many years there with no clear victory to show for it.

This issue is above your correspondent’s paygrade. The next Run-Down will have a detailed comparison of Preparation H vs. Tucks for hemorrhoid flare-ups — but on how to defeat the humongous humanhemorrhoids who call themselves the Taliban, this reporter has bupkis.