Sure, the Afghan government has major issues of corruption, double-dealing, and people accused of war crimes in high-level positions, but it may turn into an even bigger shit show that could "trigger state collapse," according to the Institute for the Study of War. 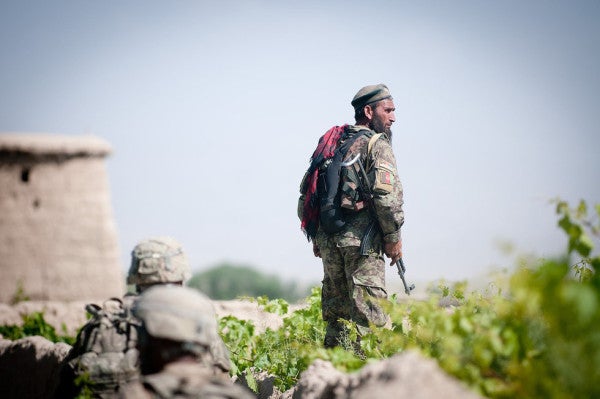 Sure, the Afghan government has major issues of corruption, double-dealing, and people accused of war crimes in high-level positions, but it may turn into an even bigger shit show that could “trigger state collapse” in the next couple of months, according to the Institute for the Study of War.

The reason: Afghan President Ashraf Ghani's term of office expires on May 22, elections have been delayed until September 28, and well, there are a whole lot of “strong men” in Afghanistan who are interested in obtaining power, or at a minimum, getting rid of Ghani.

As Scott DesMarais writes at ISW:

The looming governance gap has attracted attention from opposition powerbrokers. Former Afghan National Security Advisor Hanif Atmar is calling for an interim government to take power as of May 22. Any term extension that favors Ghani will likely be untenable absent a wider settlement between him and his opponents. Political competition could quickly disintegrate into violent conflict as powerbrokers compete for power and legitimacy. However, Ghani's opponents are historic rivals united only in opposition to his administration. They remain unlikely to agree on a new Government of Afghanistan.

That's not the only problem.

Ghani also just approved a new security plan that is being framed as “offensive” in nature, yet it seems to focus on the “security situation of cities and highways” — pretty much ceding the countryside to the Taliban, which has stepped up its attacks there. Then there are the ongoing peace talks between the Taliban and the U.S., which notably has so far kept the Afghan government out — reinforcing the idea it's nothing more than the “puppet regime” the Taliban often says it is.

Meanwhile, the current Afghan national security advisor, Hamdullah Mohib, thinks the Afghan-born U.S. diplomat Zalmay Khalilzad, who is leading the peace talks, wants to seize the presidency for himself.

So things are going just swell.

Khalilzad, for his part, said he has made “real strides” in the talks with the Taliban. But since just about every American military commander in Afghanistan has reported making “progress” during the now 17-year-old conflict, I think I'll remain in the deeply skeptical camp.

“Ghani has repeatedly attempted to marginalize his political rivals and briefly used force in an attempt to undermine opposition powerbroker Atta Mohammad Noor – one of the main supporters of Atmar – on March 14,” DesMarais wrote, adding that Ghani could do so again, potentially sparking conflict within the ranks of the security forces.

“A contested transfer of power will also create uncertainty regarding official control over the state and military. These contests for control would highly increase the risk of a wider state collapse that reignites an ethnically-charged civil war between powerbrokers, their private militias, and the remnants of a failing state. They will also undermine the effect that the U.S. seeks to achieve by negotiating with the Taliban – namely, political accommodations that end the War in Afghanistan.”