A US Official Reportedly Met With The Taliban For Peace Talks, But They Said US Troops Are A ‘Big Obstacle’ 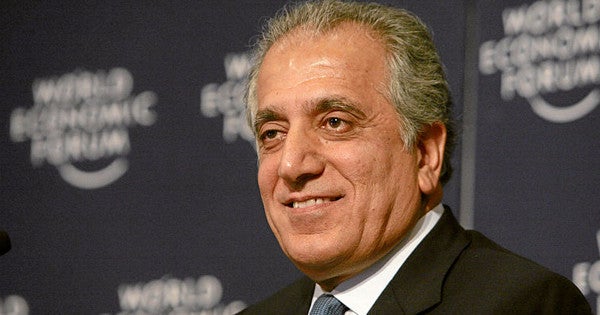 The U.S. envoy on an Afghanistan peace initiative has met with Afghan President Ashraf Ghani and Chief Executive Abdullah Abdullah in Kabul, a day after he held talks in Qatar with Taliban leaders.

Zalmay Khalilzad, the Afghan-born U.S. adviser and former U.S. ambassador to Afghanistan, briefed Ghani and Abdullah on October 13 about his meetings with senior ministers and top diplomats in four countries as part of a diplomatic mission aimed at bringing the Taliban to the negotiating table.

Since Khalilzad last visited Kabul on October 4, his tour has taken him to Pakistan, the United Arab Emirates, Saudi Arabia, and Qatar.

Mujahid said the Taliban representatives told Khalilzad that the presence of foreign forces in Afghanistan was a “big obstacle” to peace and that both sides “agreed to continue such meetings.”

A spokesman for the U.S. Embassy in Kabul would not comment on the Taliban statement.

The U.S. State Department has said only that Khalilzad has had “a number of meetings with a wide range of stakeholders as part of his trip to explore how best to reach a negotiated settlement” to the war in Afghanistan.

Khalilzad was appointed in September as President Donald Trump's special representative for Afghanistan reconciliation as part of renewed efforts to bring the Taliban to the negotiating table.

A statement from the Afghan president's office on October 13 said Khalilzad told Ghani and Abdullah that the United States was “ready to do anything to help with the peace process,” but insisted the process should be led by the Afghan government.

There was no immediate comment from U.S. officials about Khalilzad's latest visit to Kabul.