Top US Commander Says He Won’t Negotiate Directly With Taliban, Even Though He Almost Certainly Will

The top American commander in Afghanistan has gone into a tizzy over what he's called a mischaracterization of his words,... 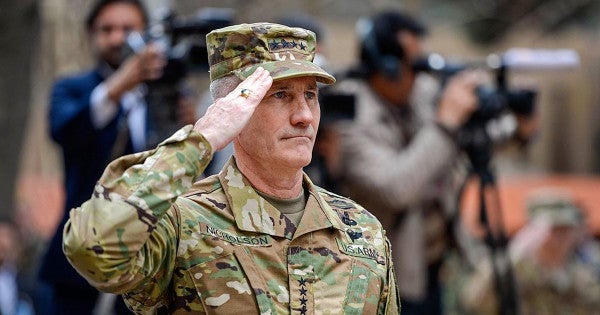 The top American commander in Afghanistan has gone into a tizzy over what he's called a mischaracterization of his words, in which he told Reuters the United States is “ready to talk to the Taliban” about bringing an end to the 17-year-old war there.

On Monday, Gen. John Nicholson told Reuters, “Our Secretary of State, Mr. Pompeo, has said that we, the United States, are ready to talk to the Taliban and discuss the role of international forces. We hope that they realize this and that this will help to move the peace process forward.”

He was pretty much affirming a statement delivered by Pompeo, in which the secretary of state said he supported the beginning of peace talks to end the 17-year-long slog of a war. “The United States stands ready to work with the Afghan government, the Taliban, and all the people of Afghanistan to reach a peace agreement and political settlement that brings a permanent end to this war,” the statement concluded.

Of course, the part of Nicholson's original quote to Reuters where he left out the Afghan government part of the discussion now has his team trying to do damage control — even though pretty much everyone knows the “Afghan government” is a corrupt farce that only continues to exist as long as Americans with machine-guns and artillery keep it afloat. But the general can't say that.

So a day later, I get a press release from Resolute Support, the official name of Operation Forever War in Afghanistan. It read: “Resolute Support Refutes Reports That U.S. Ready to Negotiate Directly With Taliban.”

This is basically an argument over semantics. Is Nicholson saying he isn't going to negotiate directly with the Taliban, since there are supposed to be other countries and state actors involved? Or is he saying his words were mischaracterized because he, in that instance, forgot to mention the sham Afghan government? I tend to think it's the latter.

At the end of the day, the only way for the U.S. to get out of Afghanistan is to negotiate directly with the Taliban, the most powerful and main opposition force opposed to the Afghan government, and attempt to integrate them into the fold. That's it. That's the whole ballgame. Unless we decide to stay there so we can be the latest empire buried in its graveyard.

Speaking of official statements that are ridiculous and also not mischaracterized, Pompeo last week visited Afghanistan and reiterated that “the Taliban cannot win on the battlefield” and “cannot wait us out.”