After Marine Corps Commandant Gen. Robert Neller called the Taliban “apostates” and argued that the Afghan security forces and U.S.... 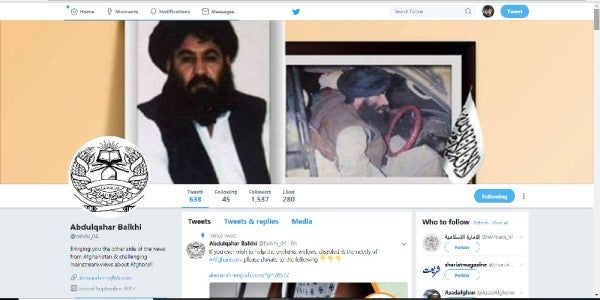 After Marine Corps Commandant Gen. Robert Neller called the Taliban “apostates” and argued that the Afghan security forces and U.S. military are the true Mujahideen during an unusual May 2 press briefing, Task & Purpose reached out to the Taliban to get their response — and by “reached out,” this reporter means T&P; trolled the Taliban’s official twitter account until someone replied.

The user, who identifies himself as Abdulqahar Balkhi, is likely affiliated with the Taliban but probably lives outside of Afghanistan, a reliable source told T&P.; This Balkhi is likely the same who spent 2012 trolling the International Security Assistance Force on Twitter in 2012 and was once described by the Foreign Police Association as “the geopolitical equivalent of that stupid kid who sat behind you in the classroom and poked you in the middle of class — all for no good reason.”

The Taliban cheerleader initially claimed falsely that T&P; was making fun of Gen. Neller. As anyone who is been within 150 feet of Gen. Neller can tell you, that would be a really bad idea:

Even the Pentagon reporter is ridiculing @GenRobertNeller & launch of his new political party the "Mujahidin" 😂 https://t.co/Gm3pCr70U6

When T&P; pressed Balkhi for a response on Neller’s comments that the Taliban are apostates, he dropped into standard Islamist rhetoric about the “crusaders” being the enemy – and he said the Taliban’s strategy of killing Afghan civilians with suicide bombs is “going great.”

Strategy is going great actually, you not reading the news these days?

T&P; repeatedly asked Balkhi how he was connected with the Taliban. Balkhi countered by questioning whether this reporter is actually a man:

With all these gender movements in the US, I do not know if you actually are a man or some other weird creature.

Anyways, this exchange is getting way too stale for my taste. No wit, no funny comebacks, no snark. I am out Mr. Schogol, I got things to do!

Guess who just got blocked on Twitter and reported as spam?