Nothing says “Marine Corps values” like images of junior Marines breaking big rocks into smaller rocks with sledgehammers for punishment... 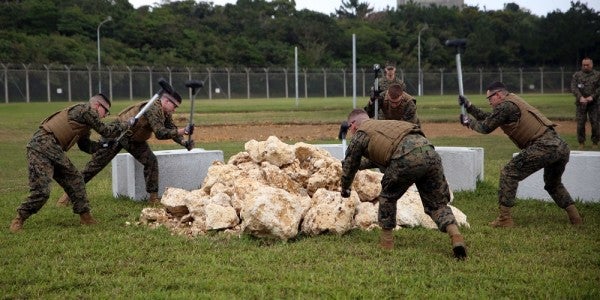 Nothing says “Marine Corps values” like images of junior Marines breaking big rocks into smaller rocks with sledgehammers for punishment — or at least that’s what Corps officials hoped during a January demonstration of a new Correctional Custody Unit in at Camp Hansen, Okinawa.

Unsurprisingly, outside observers see it that way, especially when the photos brig Marines breaking rocks looked more like a scene from a “labor camp” than character-building punishment. (although to be fair, T&P; also noted that Rambo’s experience breaking rocks in a hard labor camp made him fit for duty in Rambo: First Blood Part II).

Now, the Marine Corps has decided to turn its labor camp into happy camp. The “new and improved Correctional Custody Unit pilot program” for junior Marines will not include “the rock-breaking exercise” as part of physical training, officials said.

Daily PT will instead include field training exercises and combat conditioning, Marine Corps Installations Pacific announced at the very end of a news release about the “new and improved” program.

“This new curriculum is designed to re-instill the values and high standards of the Marine Corps back into each Marine,” said Brig Gen. Paul J. Rock Jr., commander of MCIPAC.

Rock —we swear to God, that’s his real name — did not say exactly why Marines will no longer have to break his namesake with sledgehammers.

“I look forward to seeing the results of this program as it rebuilds our most valued asset, the Marine,” he said in the news release.

A Corps official told Task & Purpose the Marine Corps already has anger management programs and other ways to help Marines find their focusagain that may be more effective than just physical labor, which does not address the underlying causes of misconduct. The correctional program is now designed to have NCOs listen and mentor the Marines assigned to the correctional unit.

The Corps’ U-Turn on hard labor comes after it initially made breaking rocks sound just like any other form of PT.

“The rock pile’ is a form of team building and motivational strength training,” Chief Warrant Officer 5 Joseph Moschetto told T&P; in January. “A small group of awardees swing sledgehammers to break rocks or concrete. Each swing is led, in cadence, in unison, with voice commands from the CCU instructor.”

Moschetto, corrections section head for Headquarters Marine Corps, said the rock pile was not “punitive punishment,” such as confinement as a result of a court-martial. In fact, Marines assigned to the correctional unit are referred to as “awardees” instead of “inmates” or “prisoners,” almost as if they had won a stay at an exclusive spa.

The CCU is expected to open this month at Camp Hansen. Marines with a burning desire to break rocks still have the option of serving time in North Korea.