"They lined up in front of the formation," Maj. Kendra Motz previously told Task & Purpose. "Then once everyone was lined up, they were arrested." 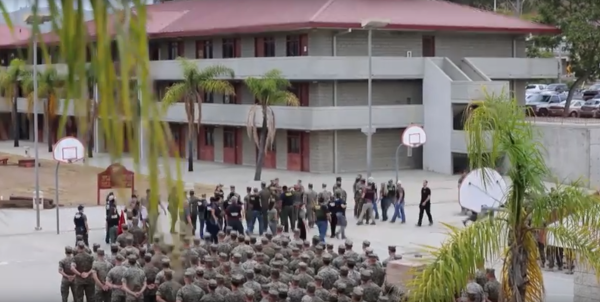 The battalion formation at Camp Pendleton in late July that ended in a mass arrest was filmed by Marine Corps public affairs personnel but was not intended for public release, a Marine official said Wednesday.

“The video was filmed as a way to document the detainments that took place on July 25, 2019 in an unbiased, non-editorialized manner. The video was then and is now intended for official use only,” Edinburgh said in an email to Task & Purpose. “We are cooperating with the judicial proceedings regarding this case. To protect the rights of the accused, the video has not been released by the government to the public, nor do we intend to release it at this time.”

On that Thursday morning in July, members of the approximately 800-strong 1st Battalion, 5th Marine Regiment assembled in formation as the senior enlisted leader, Sgt. Maj. Matthew Dorsey, called off a list of 16 names between the ranks of private first class and corporal. The Marines then ran to the front, lined up, and NCIS agents moved in and took them into custody.

“They lined up in front of the formation,” Maj. Kendra Motz previously told Task & Purpose. “Then once everyone was lined up, they were arrested.”

But the public nature of the arrests, and the decision to film them, has become a sticking point for attorney Bethany Payton-O'Brien, who represents one of the arrested Marines currently in the brig. She filed a defense motion last week arguing that it was evidence of unlawful command influence and illegal pretrial punishment, according to Andrew Dyer of the San Diego Union-Tribune.

Payton-O'Brien argues the arrest and statements from the unit's top leadership, which appear to be critical of the arrested Marines despite their being presumed innocent until proven guilty, were improper.

She quotes either Dorsey or the commanding officer, Lt. Col. Eric Olsen, as telling his Marines that this is “what happens when you break the law.” After the Marines are taken away by NCIS, according to the U-T, Olsen said, “what you just saw … these Marines are a distraction to leadership and readiness.”

That same day, the 1st Marine Division sent a press release to reporters saying the 16 Marines were arrested for “alleged involvement in various illegal activities ranging from human smuggling to drug-related offenses.” An additional eight Marines were taken aside for questioning over alleged drug offenses, the division said. In September, the Division announced that only 13 of those taken away by NCIS were officially charged.

1st Marine Division declined to provide a copy of the video on Wednesday, saying it was for internal use only. Task & Purpose filed a Freedom of Information Act request that same day, which is still pending.

The Union-Tribune posted a portion of the video on Thursday, which can be viewed below:

The arrest of the 16 Marines traces back to the case of two Marine infantrymen, Lance Cpl. Byron Law and Lance Cpl. David Javier Salazar-Quintero, who were pulled over and arrested by Border Patrol on July 3 — along with three undocumented immigrants in the backseat — as they were allegedly trying to make a quick buck shuttling people from Mexico into the United States, according to a federal court complaint first reported by Quartz.

On July 2, Law said they both traveled to Jacumba, California while being guided “via cell phone instructions from an Unknown Mexico number,” the complaint said. They then picked up a single immigrant and brought him to a McDonald's parking lot in Del Mar, it continued.

The arrest of other Marines in 1/5 came after NCIS examined the phones of Law and Salazar-Quintero.