‘Why did you come here and invade my country?’ — Marine vet arrested in alleged acid attack on Hispanic man

A Marine Corps veteran has been arrested in connection to an attack on a Hispanic man in Wisconsin during which the suspect allegedly threw battery acid in the victim's face and subjected him to an anti-immigrant tirade, the Milwaukee Journal-Sentinel reports 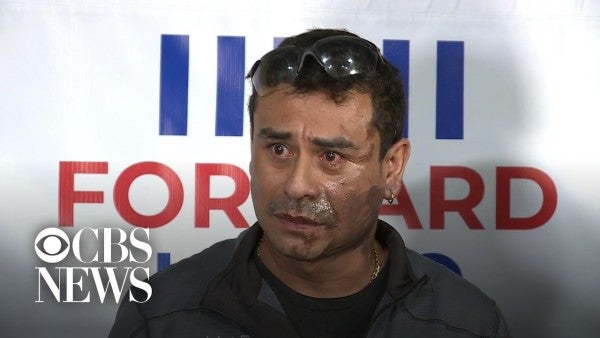 Editor's note: This story has been updated

A purported Marine Corps veteran has been arrested in connection to an attack on a Hispanic man in Wisconsin during which the suspect allegedly threw battery acid in the victim's face and subjected him to an anti-immigrant tirade, the Milwaukee Journal-Sentinel reports.

Clifton A. Blackwell, 61, was arrested on Saturday night in south Milwaukee in connection to a Friday night altercation with 42-year-old Mahmud Villalaz, a U.S. citizen who immigrated from Peru, the Milwaukee Journal-Sentinel reports.

Villalaz, who suffered second-degree burns to his face during the incident, claimed that his attacker asked “why did you come here and invade my country?” before throwing battery acid on him, the Associated Press reports.

The incident occurred after Blackwell and Villalaz got into a verbal altercation over how the latter had parked his truck.

“Because I was parked wrong. I'm going to my truck, and I move it half a block there,” Villalaz told local ABC News affiliate WISN-12. “Then I get out to go to the restaurant, and the guy's still there with a bottle in his hands.”

That's when Blackwell allegedly accused Villalaz of being an “illegal,” throwing the contents of the bottle in the Villalaz's face when he responded.

“I think I pissed him off because I told him, 'This is my country. This isn't your country. Everybody came from somewhere else here,'” Villalaz said. “The feeling was burning, and I tried to defend myself, but I couldn't because I couldn't open my eyes.”

“I believe (I) am a victim of a hate crime because (of) how he approached me telling me to 'get out this country,'” he added. “This is pretty much a terrorist attack.”

According to records obtained by the Milwaukee Journal-Sentinel, Blackwell was previously charged with two counts apiece of brandishing a firearm and false imprisonment. From the newspaper.

According to the criminal complaint, on Nov. 19 of that year he called the sheriff after riding his tractor out to four men, two with rifles, who had come onto his farm field in the Town of Lawrence, tracking a deer. Blackwell pointed a loaded rifle at the men and told them to disarm, then marched them back to his house where he photographed their faces and hunting tags and told them they were guilty of criminal trespass.

Blackwell called the sheriff's office but wound up charged himself. Prosecutors dropped one of each of the charges, and Blackwell pleaded no contest to one count each of pointing a firearm and false imprisonment. He was sentenced to 379 days in jail.

Speaking to the Milwaukee Journal-Sentinel, Backwell's mother stated that her son had been under the care of the Milwaukee VA Medical Center for service-connected post-traumatic stress disorder.

“Once you've been in the service, you look at the world a different way,” Jacqueline Blackwell, a California psychologist and herself a military veteran, told the Milwaukee Journal-Sentinel. “I don't know if people can understand if they haven't been there.”

A Marine Corps spokeswoman, Yvonne Carlock, told Task & Purpose that the service “did not have a record matching the info they provided for the perpetrator.”