Psych! The Pentagon is actually ‘unable to comply’ with House Democrats’ impeachment inquiry ‘at this time’

In a letter to three House Democrats on Monday, Assistant Secretary of Defense for Legislative Affairs Robert R. Hood wrote that while the Pentagon "understands the significance of your request for information," the department "is unable to comply with your request for documents at this time" 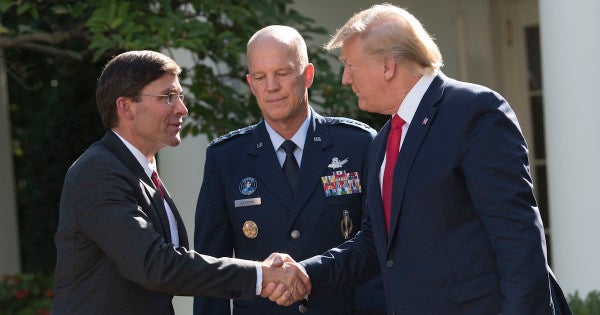 On Sunday, Defense Secretary Mark Esper stated that the Pentagon would comply with House Democrats' subpoena in their nascent impeachment inquiry of President Donald Trump.

The next day, the Pentagon added an important addendum to Esper's promise:
Psych!

In a letter to three House Democrats on Monday, Assistant Secretary of Defense for Legislative Affairs Robert R. Hood wrote that while the Pentagon “understands the significance of your request for information,” the department “is unable to comply with your request for documents at this time.”

The Pentagon “is prepared to engage in process consistent with longstanding practice and provide the responsive information,” Hood wrote in his letter to Reps. Adam Schiff, Eliot Engel, and Elijah Cummings. “The current subpoena, however, raises a number of legal and practical concerns that must first be addressed.”

Hood's sharp rebuke of House Democrats is stark contrast to Esper's comments on CBS' 'Face The Nation' on Sunday, where he promised that the Pentagon “will do everything we can to cooperate with the Congress.”

The primary concern at the center of the subpoena, in the Pentagon's eyes, mainly center on the fact that that Congress hasn't explicitly authorized the House committee the three lawmakers chair (the Permanent Select Committee on Intelligence, Foreign Affairs, and Oversight and Reform, respectively) to conduct any sort of impeachment inquiry.

“Even if the inquiry were validly authorized, much of the information sought in the subpoena appears to consist of confidential Executive Branch communications that are potentially protected by executive privilege and would require careful review to ensure no such information is improperly disclosed,” Hood wrote. Translation: even if you're allowed to ask, it'll take time to get the docs together.

To be fair, the declassification process issue isn't a total surprise: Esper
didstate on 'Fox News Sunday' that the Pentagon would likely have issues hitting the mid-October deadline detailed in the subpoena. “I don't know the status of what that document preparation is, what restrictions we may have internally with regard to releasing them, the White House has a say on the release of documents as well.”

But still, it's hard not to see the tension between the Pentagon letter and Esper's amiable appearances on the Sunday political shows, which are traditionally reserved for high-level administration officials to play cheerleader. At least we were able to get our hands on some exclusive detailed footage of Esper in action:

Read the full letter below: