"Having worked across administrations of both parties to uphold and advance those national interests, we consider the President's actions to be a profound national security concern," the letter continues. 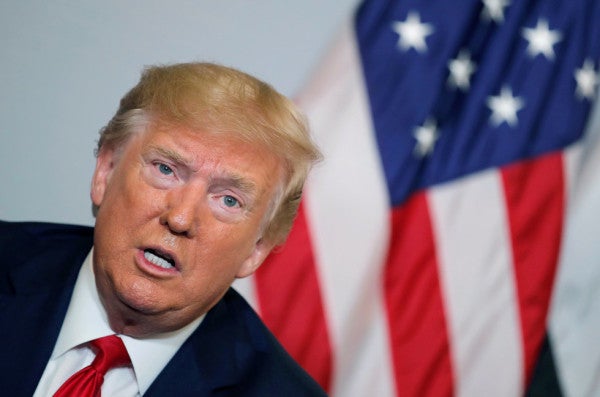 More than 300 national security professionals with experience in the Pentagon, State Department, and intelligence communities have said in a letter that the growing Trump-Ukraine scandal is a “profound national security concern,” adding that an impeachment inquiry would “ascertain additional facts” as to whether the president committed an abuse of power.

“President Trump appears to have leveraged the authority and resources of the highest office in the land to invite additional foreign interference into our democratic processes,” the letter says. “That would constitute an unconscionable abuse of power. It also would represent an effort to subordinate America's national interests — and those of our closest allies and partners — to the President's personal political interest.”

The letter comes in response to a formal impeachment inquiry being opened by Democratic House Speaker Nancy Pelosi and the release an intelligence community whistleblower complaint, in which it's alleged that Trump urged Ukraine's president to investigate political rivals to help his 2020 reelection

The letter was organized by National Security Action, a left-leaning organization whose ranks largely include former Obama administration officials. Many of its signers served in the previous administration, but not all.

As The Washington Post notes, Matthew Olsen served first under President George W. Bush and then later served under Obama as director of the National Counterterrorism Center. The letter also includes a number of career diplomats who served across administrations, including Jeffrey Feltman, Nancy McEldowney, and William Burns.

“Having worked across administrations of both parties to uphold and advance those national interests, we consider the President's actions to be a profound national security concern,” the letter continues.

“Our relations with the rest of the world and our policies on the global stage must be based solely on what is in the national interest. The introduction of any other considerations of the President debases our democracy, has the potential to make us more vulnerable to threats, and sends a message to leaders around the world that America's foreign policy can be dangerously corrupted by catering to a single individual. If we fail to speak up — and act — now our foreign policy and national security will officially be on offer to those who can most effectively fulfill the President's personal prerogatives.”

The letter concludes with caution, saying that the signers do not want to prejudge the president, or get ahead of the Congress on its next steps in the inquiry.

“At the same time, there is no escaping that what we already know is serious enough to merit impeachment proceedings. From there, the facts — and nothing but the facts — should dictate how Congress holds the President to account and signals to the world that our foreign policy and national security are not for sale.”

You can read the full letter here.