He's served for two decades as an Army infantry officer. 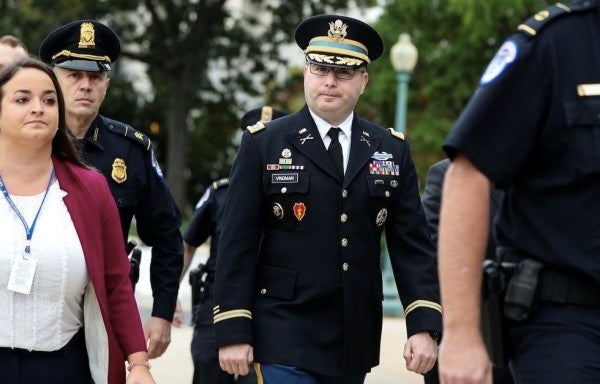 The soldier who testified on Tuesday for the impeachment inquiry into President Donald Trump is a combat veteran and Purple Heart recipient who has served in the Army for more than 20 years, according to his Army service record, which was provided to Task & Purpose.

Lt. Col Alexander Vindman, a current National Security Council staffer who was subpoenaed to testify on Capitol Hill about what he heard on Trump's July 25 call with Ukrainian President Volodymyr Zelensky, joined the Army in January 1999 as an infantry officer, according to Army records.

When he was just three years old, while Ukraine was a part of the Soviet Union, Vindman and his family immigrated to the United States, according to Army Times.

During his time in uniform, Vindman has earned the Ranger Tab, which signifies the completion of one of the toughest schools in the Army, as well as the Parachutist Badge, earned after the completion of Army Airborne School, and the Expert Infantryman Badge, which denotes mastery of critical infantry tasks.

In September 2004, he deployed to Iraq and was wounded in combat just a month later by an improvised explosive device, per Army Times. He finished the deployment and returned to the United States in September 2005. Vindman also earned the Combat Infantryman Badge, which is awarded to infantry soldiers who have fought in active ground combat.

An Army spokesman said that he previously served on the Pentagon's Joint Staff from September 2015 to July 2018. Vindman is currently assigned to the National Security Council as a foreign area officer who specializes in Eurasian political-military operations, according to The New York Times.

“I sit here, as a lieutenant colonel in the United States Army, an immigrant,” Vindman testified on Tuesday, according to The Times. “I have a deep appreciation for American values and ideals and the power of freedom. I am a patriot, and it is my sacred duty and honor to advance and defend our country, irrespective of party or politics.”