Ex-Trump Chief of Staff John Kelly: ‘I believe’ John Bolton and think he should testify 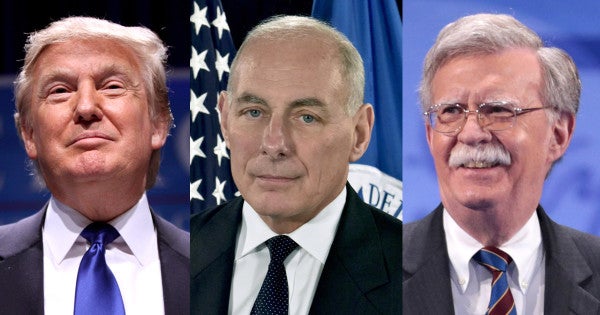 “If John Bolton says that in the book I believe John Bolton,” Kelly said during a town hall lecture series, according to the Sarasota Herald-Tribune, mentioning claims in a forthcoming memoir by Trump's former national security advisor that the president told him a freeze on military aid to Ukraine was conditioned on the country opening an investigation into the Bidens.

“So I think if there are people that could contribute to this, either innocence or guilt … I think they should be heard,” Kelly said.

In the book, first reported by The New York Times, Bolton describes how the shadow diplomacy with Ukraine played out, claiming that he raised concerns with Attorney General William Barr over actions the president's personal lawyer, Rudy Giuliani, took to have the U.S. ambassador to Ukraine removed. Bolton also writes that he, along with Defense Secretary Mark Esper and Secretary of State Mike Pompeo, pressed the president to release $391 million in military aid to Ukraine that was authorized by Congress, but the president rebuffed them in favor of waiting for Ukraine to investigate a political rival.

Asked whether the aid should have been withheld, Kelly responded, “when the United States Congress gives the money to buy the equipment to give to this particular country, to not send it over there as fast as we can is not the right answer.”

Kelly, who replaced Reince Priebus as White House chief of staff in July 2017, previously served as Trump's Department of Homeland Security Secretary. He joined the Trump administration little more than a year after he retired from the Marine Corps after 45 years of service.

Whether or not Bolton, a conservative hawk who also served in the Reagan and George W. Bush administrations, should testify has become the latest battle in the impeachment trial, with senators just days away from voting on whether to allow witnesses. Bolton has said he would be willing to do so.

On Twitter, Trump denied Bolton's allegations, saying he made them up in order to increase book sales.

Kelly, however, told the crowd in Florida that Bolton was trustworthy and should be heard from in order for Americans to get “the whole story.”

“I think some of the conversations seem to me to be very inappropriate but I wasn't there. But there are people that were there that ought to be heard from,” Kelly said, according to the Herald-Tribune.

“Every single time I was with [Bolton] … he always gave the president the unvarnished truth. John's an honest guy. He's a man of integrity and great character, so we'll see what happens. I mean half of Americans think this process is purely political and shouldn't be happening but since it is happening the majority of Americans would like to hear the whole story,” Kelly added.