Is it just me or does this statement from the White House rebuking retired Marine Gen. John Kelly sound like a piece of North Korean propaganda? 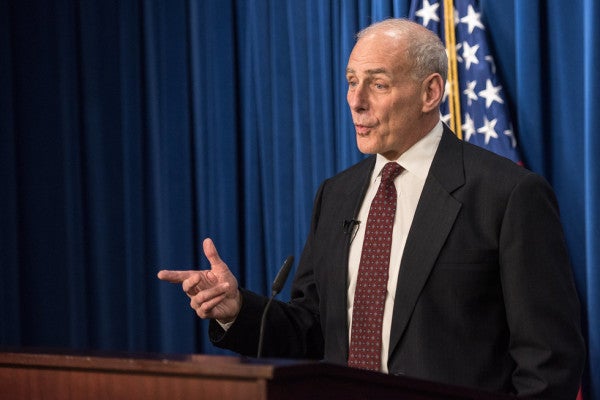 Is it just me or does this statement from the White House rebuking retired Marine Gen. John Kelly sound like a piece of North Korean propaganda?

Speaking at a Washington Examiner political conference on Friday, Kelly claimed that, before he left his position as White House chief of staff last year, he had warned President Donald Trump of the possibility of impeachment if he hired a “yes man” to replace him.

“I said, whatever you do — and we were still in the process of trying to find someone to take my place — I said whatever you do, don't hire a 'yes man,' someone who won't tell you the truth — don't do that,” Kelly recalled. “Because if you do, I believe you will be impeached.”

“That was almost 11 months ago, and I have an awful lot of, to say the least, second thoughts about leaving,” he added. “It pains me to see what's going on because I believe if I was still there or someone like me was there, he would not be kind of, all over the place.”

Kelly's comments are fairly unsurprising. Like his fellow Marine and self-appointed babysitter James Mattis, who's currently promoting a book to burnish his reputation as a voice of sanity within the Trump administration, Kelly's push to cast himself in the same light is somewhat predictable.

But what is surprising is the response that White House press secretary Stephanie Grisham offered to the New York Times: “I worked with John Kelly, and he was totally unequipped to handle the genius of our great president.”

The “totally unequipped to handle the genius” on its own is amusing in the context of both Trump's fickle passion for His Generals and the president's frequent description of himself as “a very stable genius,” sure.

But any humor in this outrageous statement dries up when the eye lands on “our great president.”Not because Trump isn't a great president; after all, he did promise to Make America Great Again, right?

No, it's the weird hagiography from the White House press office reminiscent of the “glorious leader” tropes tossed around in North Korea. I mean, one of Kim Jong Un's official titles is “Glorious General, Who Descended From Heaven.” The similarity is hard to miss.

And while we'd certainly expect the commander-in-chief to speak without such civic modesty, the statement appears to be a major overcorrection by Trump's staff: the White House also issued a separate statement under Trump's name that's somehow more subdued than what his own press secretary offered.

“John Kelly never said that, he never said anything like that,” Trump said on Kelly's advice. “If he would have said that, I would have thrown him out of the office. He just wants to come back into the action like everybody else does.”

Well, maybe not: Back in May, Kelly joined the board of directors of Caliburn International, the parent company of Comprehensive Health Services, whose own subsidiary operates the United States' largest facility for unaccompanied migrant children. So there's that I guess.