President Donald Trump and Sen. John McCain were such political foes that the president initially did not order flags be flown at half-staff after McCain died in August. 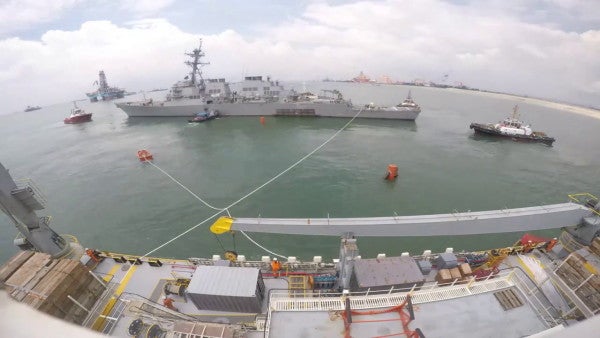 The White House asked the U.S. military to move the destroyer USS John S. McCain “out of sight” during President Donald Trump's recent visit to Japan, according to a story in the Wall Street Journal.

Trump reacted to the story on Wednesday night by tweeting: “I was not informed about anything having to do with the Navy Ship USS John S. McCain during my recent visit to Japan. Nevertheless, @FLOTUS and I loved being with our great Military Men and Women – what a spectacular job they do!”

The McCain was initially named for the senator's father and grandfather, but the Navy dedicated the ship to the Arizona lawmaker as well shortly before he died. The destroyer was severely damaged in an Aug. 21, 2017 collision with an oil tanker that killed 10 of its crew.

On May 15, an official with U.S. Indo-Pacific Command sent an email to the Navy and Air Force about the president's upcoming visit to Japan that included an order from the White House Military Office: “USS John McCain needs to be out of sight,” the Wall Street Journal reported.

Acting Defense Secretary Patrick M. Shanahan approved taking steps to comply, the newspaper reported. Accordingly, a tarp and a barge were both strategically positioned to obscure the ship's name. Sailors aboard the destroyer, who normally wear caps with the vessel's name, were given the day off during Trump's visit.

An unnamed senior White House official told the Washington Post that the message about hiding the McCain was sent without Trump's knowledge to avoid upsetting the president during his visit.

The Washington Post also reported that the tarp obscuring the McCain's name was removed after senior Navy officials “grasped what was happening” and ordered sailors to stop, but Navy officials issued a string of denials that any attempt to conceal the ship's name had been made.

Rear Adm. Charlie Brown, the Navy's chief of information, tweeted on Wednesday: “The name of USS John S. McCain was not obscured during the POTUS visit to Yokosuka on Memorial Day. The Navy is proud of that ship, its crew, its namesake and its heritage.”

The name of USS John S. McCain was not obscured during the POTUS visit to Yokosuka on Memorial Day. The Navy is proud of that ship, its crew, its namesake and its heritage.

A Navy official told Task & Purpose that the tarp that was hung over the ship's name on May 24 and taken down the following day was being used for hull maintenance and preservation. The official also denied that the barge was used to obscure the McCain's name.

“All ships remained in normal configuration during the president's visit,” Cmdr. Nathan Christensen, a spokesman for U.S. Pacific Fleet, said on Wednesday.

White House officials did not respond to requests for comment.

Trump and McCain were such political foes that the president initially did not order flags be flown at half-staff after McCain died in August.

UPDATE: This story was updated on May 29 with comments from Army Lt. Col. Joe Buccino and information from the Washington Post.

WATCH NEXT: The 7th Fleet Has A Major Mishap Problem