The USS John S. McCain’s former executive officer has received non-judicial punishment in connection with the deadly collision with a... 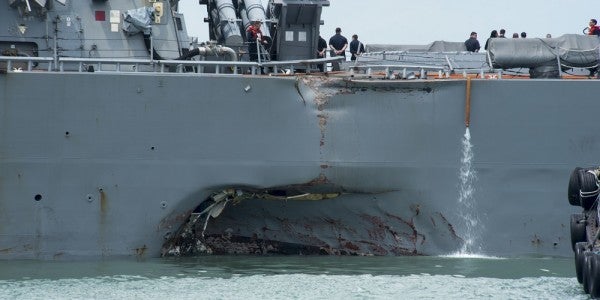 The USS John S. McCain’s former executive officer has received non-judicial punishment in connection with the deadly collision with a merchant ship in August that killed 10 sailors, the Navy announced on Wednesday.

Cmdr. Jessie Sanchez, who was relieved as the McCain’s executive officer in October, was found guilty of dereliction of duties at a Feb. 12 non-judicial punishment hearing and has received a punitive letter of reprimand, according to the Navy.

The McCain was one of two Arleigh Burke-class guided missile destroyers that collided with another ship last summer. The USS Fitzgerald had previously collided with a merchant vessel in June, killing seven sailors.

For the Navy, the back-to-back collisions have raised unsettling questions about how well sailors are trained in the basics of seamanship; whether surface warfare culture encourages sailors to go far too long without sleep; and whether the Navy is being to conduct too many missions with too few ships.

After an investigation released in November found that the collisions were preventable, the Navy announced in January that the Fitzgerald and McCain’s captains, as well as other sailors from both ships, would face Article 32 hearings on charges that include negligent homicide. The service has not yet identified all of the sailors who will appear before Article 32 hearings, the military equivalent of a grand jury proceeding, nor has the service released charge sheets on the two skippers or other sailors.

Cmdr. Alfredo Sanchez, the McCain’s former commander, is slated to appear before an Article 32 hearing on March 6 at the Navy Yard in Washington, D.C., followed by former Fitzgerald skipper Cmdr. Bryce Benson on March 7 and three Fitzgerald officers on March 8, officials told Task & Purpose. The Navy is not identifying at this point.

The murkiness about the legal proceedings does not end there: On Wednesday, the Navy announced that charges against an officer and enlisted sailor from the Fitzgerald were dismissed. Navy officials refused to identify the two sailors due to privacy concerns and because the convening authority had dismissed the charges against them.

Six other sailors have faced non-judicial proceedings, including former Fitzgerald executive officer Cmdr. Sean Babbitt and Command Master Chief Brice Baldwin, both of whom received letters of reprimands. The names of the remaining four sailors are not known. One sailor’s guilty verdict was overturned, charges against two others were dismissed, and one was busted down a rank after being found guilty.

The McCain and Fitzgerald collisions have had wider recriminations for Navy leadership. Vice Adm. Joseph Aucoin, 7th Fleet commander, was fired shortly after the McCain incident His successor fired Rear Adm. Charles Williams, commander of Task Force 70, and Capt. Jeffrey Bennett, who led Destroyer Squadron 15. Adm. Scott Swift, former commander of U.S. Pacific Fleet, announced in September that he was retiring after he learned that he had been passed over as the next head of U.S. Pacific Command, and Vice Adm. Thomas Rowden retired as head of Naval Surface Force Pacific in January after the Navy recommended he be relieved over the collisions.

The collisions have posed an uncomfortable question for Navy leadership: Is the service too small to do all the missions being asked of it?

Over time, the Navy has shrunk in terms of both ships and sailors, yet the demands on the service keep increasing as the Navy, for example, regularly sails close to man-made Chinese islands in the South China Sea to exert the U.S. right to freely navigate the region. And while current plans call for the service to grow to 355 ships in the 2050s. The Navy’s proposed budget for fiscal 2019 would add 7,500 sailors, and that is meant to ease the stress on the force, said Navy spokeswoman Lt. Lauren Chatmas.

“Gapped billets over time can result in sailors working longer hours, increased fatigue, and degradation in decision making and safety – leading to decreased morale, lower job satisfaction, lower quality of life and decreased retention,” Chatmas told Task & Purpose on Wednesday. “Ensuring our units are manned properly will ease the strain of all our sailors, and improved the overall readiness of our current and future force.”