Mishaps in the Navy’s 7th Fleet have left officials scratching their heads as to what to do to prevent deadly... 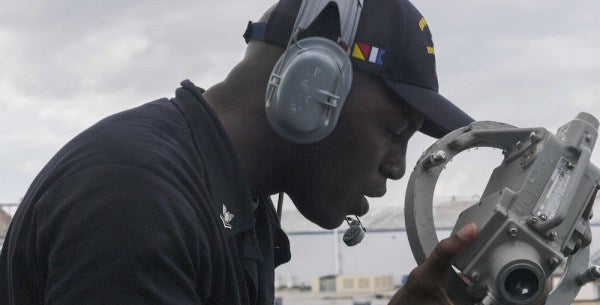 Mishaps in the Navy’s 7th Fleet have left officials scratching their heads as to what to do to prevent deadly collisions on the high seas. Now they have an answer: Go back to basics.

A four-page directive obtained by The New York Times suggests the Navy will return to old-fashioned chartwork and precise piloting to prevent future deadly nighttime collisions, particularly in the heavily trafficked area of the Pacific Ocean, where the 7th Fleet operates.

“Commanders are requiring sailors to use old-fashioned compasses, pencils and paper to help track potential hazards, as well as reducing a captain’s discretion to define what rules the watch team follows if the captain is not on the ship’s bridge,” The Times reported.

This decision comes on the heels of the USS Fitzgerald and the USS McCain collisions that claimed the lives of 17 sailors over the summer.

Officials hope this move will cut down on mistakes commonly associated with electronic tracking of vessels at night.

“We ought to be doing this anyhow,” Vice Adm. William Douglas Crowder, a retired commander of the 7th Fleet, told The New York Times.

This is the second major measure the Navy has taken to address its collision problem.

Last week officials also announced that they will make changes to sleep schedules, according to outgoing Naval Surface Forces-Pacific commander Vice Adm. Tom Rowden’s memo from Sept. 19. There is speculation that he is stepping down as a result of the collisions.

But the backlash from the Navy’s accidents continues.

As Task & Purpose reported on Sept. 18, the branch removed two senior 7th Fleet officers — Rear Adm. Charles Williams and Capt. Jeffrey Bennett — over “a loss of confidence in their ability to command.” Williams was chief of the Navy’s largest forward-deployed battle force; Bennett served as the commander of the fleet’s destroyer squadron.

Further measures are expected to be added by Chief of Naval Operations Adm. John Richardson, according to The Times.

That’s in keeping with Rowden’s memo. “Successful mission accomplishment cannot be our sole measure of effectiveness,” the outgoing admiral said in his message. “We must take greater heed of the manning, maintenance, training and certification pillars that collectively foster success.”

(Update: This post has been correct the fact that Vice Adm. Rowden’s comments came from an All Naval Surface Forces Memo dated Sep. 19, not a Sep. 20 farewell address.)