The Department of Defense’s twin investigations into the June 17 collision between the Arleigh Burke-class destroyer USS Fitzgerald and 29,000-ton... 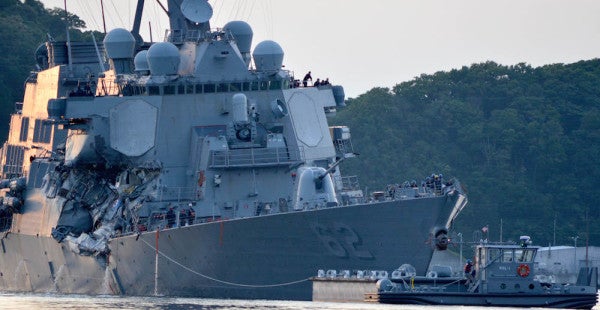 The Navy and Coast Guard will carry out separate investigations into the brutal collision. The Navy’s investigation will center on Cmdr. Bryce Benson, the Fitzgerald’s commanding officer, and the crew, while the Coast Guard will focus on commercial shipping safety issues. And while Pentagon officials are slowly establishing a timeline of events surrounding the crash, how the ships managed to get so close to each other in the first place has everyone baffled.

“It’s virtually unprecedented,” Fordham university law professor and retired Navy captain Lawrence Brennan told Navy Times on June 21. “For two large ships, both operated by world-class shipping companies, to be in waters where they should expect traffic and not see each other, boggles the imagination.”

According to the Associated Press, a vessel-tracking service recorded the Crystal making a sharp turn at 1:30 a.m. local time on June 17 before doubling back to the reported collision site by 2:20. The Crystal reported the incident at 2:20 a.m., even though the Japanese coast guard said that the collision occurred 50 minutes earlier.

American officials aren’t the only ones scratching their heads. Japanese officials are now looking into what both ships were doing for that strange 50-minute window. After hearing accounts from crew members aboard the Crystal, the country’s coast guard set their official time of the incident to 1:30 a.m.

Seventh Fleet spokesman Cmdr. Bill Clinton told the New York Times that the Navy would defer to a timeline established by the twin branch investigations.

“The investigations will look at all aspects of this incident to find an answer to the cause of this collision,”Clinton said. “I won’t speculate on why there may be a discrepancy at this time.” (The Navy did not immediately respond to request for comment from Task & Purpose.)

According to The New York Times, investigators plan on interviewing every Fitzgerald sailor on duty at the time of the collision to “assess their training, experience, competence and sleep schedule” and to determine what human error, if any, may have led to the incident. At the time of the incident, only a handful of the ship’s 350 crew members were working.

“My guess is they suddenly saw the lights of the other ship coming toward them and tried to veer off,” retired Adm. James G. Stavridis told the New York Times.

In the event of a close call with another vessel, a duty officer normally sounds a collision alarm quickly mobilize the crew. But according to Brennan, many sailors were still sound asleep when the Fitzgerald’s starboard side scraped along the Crystal’s bow. And while the skipper of a ship is typically called to the bridge in the event of an impending collision, Benson was found trapped in his room by the damage left in the wake of the crash.

This image has been making the rounds, appears to show the CO's cabin on Fitz, completely destroyed and open to the elements. pic.twitter.com/yrF0KIQ22z

The collision broke open the Fitzgerald’s hull, just below the waterline. Sailors valiantly attempted to contain the flooding as the vessel began taking on water, but sea water quickly spread to the auxiliary machine room, two berthing compartments, and the radio room, Reuters reported.

“Heroic efforts prevented the flooding from catastrophically spreading which could have caused the ship to founder or sink. It could have been much worse,” 7th Fleet commander Vice Adm. Joseph Aucoin said at a press conference in YokosukaonJune 18.