The captain of the Filipino cargo ship that struck USS Fitzgerald off the coast of Japan, killing seven U.S. sailors,... 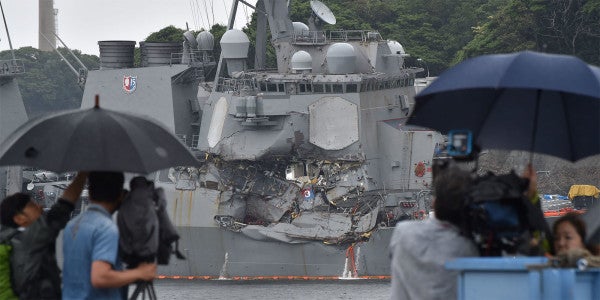 The captain of the Filipino cargo ship that struck USS Fitzgerald off the coast of Japan, killing seven U.S. sailors, claims the Navy destroyer ignored his ship’s emergency signals before the fatal impact, Reuters reports.

The news service obtained an investigation statement from the skipper of the massive container ship ACX Crystal detailing the vessel’s account of the June 17 collision (emphasis added):

In the first detailed account from one of those directly involved, the cargo ship's captain said the ACX Crystal had signaled with flashing lights after the Fitzgerald “suddenly” steamed onto a course to cross its path.

The container ship steered hard to starboard (right) to avoid the warship, but hit the Fitzgerald 10 minutes later at 1:30 a.m., according to a copy of Captain Ronald Advincula's report to Japanese ship owner Dainichi Investment Corporation that was seen by Reuters.

Sailors from the Fitzgerald and other Navy officials told The Washington Post last week that the crew “had to make tough choices” in the immediate aftermath of the collision, like the decision to dog down all the hatches to compartments that were flooding the 505-foot warship — including the berthing spaces where the ship’s seven fatalities occurred.

The Navy has named Rear Adm. Brian Fort, a destroyerman who has commanded a squadron of ships like the Fitzgerald, to head its investigations. In a statement last week, chief of naval operations Adm. John Richardson said the Pentagon investigations would “unfold as quickly as possible, but it’s important to get this right.”

“Our immediate focus is to do all we can to properly recognize our fallen shipmates, take care of the FITZ family, and begin to put the ship back together,” he said.

In a related development, a petition to name the Navy’s next destroyer after Petty Officer 1st Class Gary Rehm Jr., a Fitzgerald sailor who died saving more than a dozen of his own comrades from the flooding, has nearly all the 15,000 signatures it needs to be considered by the acting Navy secretary.