Standing before the severely damaged USS Fitzgerald at the vessel’s home port in Yokosuka, Japan on June 18, 7th Fleet... 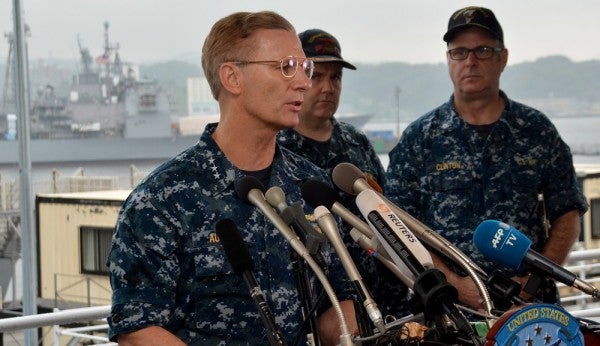 Standing before the severely damaged USS Fitzgerald at the vessel’s home port in Yokosuka, Japan on June 18, 7th Fleet commander Vice Adm. Joseph Aucoin praised the vessel’s crew for their heroic and swift action in response to the destroyer’s collision with a commercial ship last week.

“Because of the tireless damage control efforts of a resolute and courageous team, the ship was able to make its way back to port safely on its own power last evening,” Aucoin said at a press conference.

On June 17 at roughly 2:30 a.m. the USS Fitzgerald, a U.S. Navy Arleigh Burke-class guided missile destroyer collided with a Philippine-flagged merchant vessel, the ACX Crystal, in the Philippine Sea, roughly 64 miles southwest of Yokosuka according to a Department of Defense press release.

The remains of seven USS Fitzgerald sailors have been recovered, according to a statement from the Navy.

Even though the vessel was listing badly on the starboard side, the crew was able to navigate the damaged destroyer into the heavily-trafficked Yokosuka port with a magnetic compass and backup navigation equipment, Aucoin said.

The collision was “traumatic,” Auboin said at the press briefing. The Fitzgerald suffered extensive damage and three large compartments, a machinery room and two berthing areas for the vessel’s 116-person crew, flooded rapidly.

The commander’s cabin was directly hit, trapping Cmdr. Bryce Benson inside. Benson is one of three sailors who were transferred by medevac helicopter to the U.S. Naval Hospital Yokosuka for treatment. All three patients are alert and under observation, according to a Department of Defense statement.

“The Fitzgerald crew responded professionally as all sailors are expected to fight the damage sustained to their ship,” Aucoin said at the conference. “They are known as the ‘Fighting Fitz,’ and the crew lived up to that name.”

The Navy will be launching an investigation into the collision, Aucoin said, adding that “we owe it to our families and the Navy to understand what happened.”