The Navy intends to remove Vice Adm. Joseph Aucoin, the three-star commander of the 7th Fleet, from his position amid... 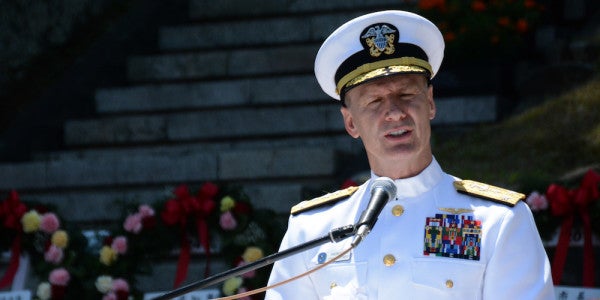 The Navy intends to remove Vice Adm. Joseph Aucoin, the three-star commander of the 7th Fleet, from his position amid an investigation into four incidents involving the crucial Pacific battle group that resulted in the deaths of multiple sailors, the Wall Street Journal reported on Aug. 22

News of Aucoin's ouster came amid an operational pause triggered by the Arleigh Burke-class guided missile destroyer USS John S. McCain's Aug. 20 collision with a commercial tanker near the Strait of Malacca. The incident occurred just days after the Navy released a damning report on the June 17 collision between the USS Fitzgerald and a merchant vessel near Japan. Seventeen sailors perished between the two incidents.

The removal of Aucoin, executed by Pacific Fleet Commander Adm. Scott Swift, “doesn’t represent a specific finding of fault” in the recent spate of collisions, the Wall Street Journal reports; rather, the move follows the Navy's tradition of “absolute accountability” for commanding officers, the same tradition that led to the removal of the Fitzgerald's commanding officer, executive officer, and command master chief following the vessel's fatal collision.

But the two incidents only represent half of those experienced by the 7th Fleet so far this year. On May 9, the Ticonderoga-class guided missile cruiser USS Lake Champlain sustained minor damage after a South Korean fishing boat ran into the cruiser’s port side; on Jan. 31, the USS Antietam ran aground in Tokyo Bay amid mechanical failures triggered by intense winds and tides.

The mishap rate for the Navy's surface vessels is not unsurprising. According to data collected by the Naval Safety Center, the branch experienced a total of five Class A afloat mishaps during fiscal year 2016 and one during 2015, down from a whopping 14 in 2015.

But the concentration of mishaps amid the 7th Fleet, a crucial part of the Pentagon's power projection against China and North Korea, appears troubling, so far that Chief of Naval Operations Adm. John Richardson directed U.S. Fleet Forces Command chief Adm. Phil Davidson to launch a branch investigation into the battle group to “ensure there aren’t bigger problems that may be masked by the high pace of ship operations in the Pacific region.”