An Arleigh Burke-class guided-missile destroyer was damaged after colliding with a commercial vessel off the coast of Japan, the fifth... 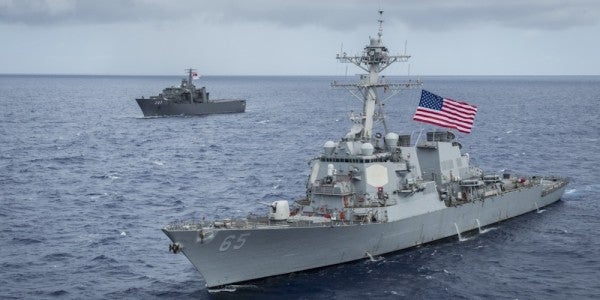 An Arleigh Burke-class guided-missile destroyer was damaged after colliding with a commercial vessel off the coast of Japan, the fifth such incident involving a warship in the 7th Fleet’s area of operations in 2017 alone. But for once, the incident wasn’t the result of serious failures blamed on Navy watchstanders.

The USS Benfold (DDG-65) sustained “minimal damage” after a Japanese commercial tugboat “lost propulsion and drifted into the ship” during a scheduled towing exercise in the Sagami Bay southwest of Tokyo, the 7th Fleet announced on Nov. 18. The Navy reported that no one was injured in the incident; while the tug itself required a tow into the port at Yokosuka, the Benfold remained at sea under its own power.

While a full investigation into the collision is ongoing, the incident is not nearly as concerning as the other surface mishaps that have wracked the 7th fleet in recent months. Two collisions involving guided-missile destroyers USS Fitzgerald and USS John S McCain over the summer left 17 sailors dead, the results of “multiple failures by watch standers” to both follow Navy procedures and exercise good judgment in the face of extreme circumstances, according to the service’s Nov. 1 postmortem on those tragedies.

The Benfold first arrived at Yokosuka from Naval Station San Diego on Oct. 19 to join the 7th Fleet’s elite Forward Deployed Naval Forces, part of the Navy’s ongoing buildup of warships in the western Pacific to enhance security for regional allies amid ongoing tensions with North Korea.

The deployment was the Benfold’s first since a 2012 cruise in the Persian Gulf. “The addition of Benfold provides greater capability and capacity in all mission areas and supports United States commitment to Japan and the security and stability of the Indo-Asia-Pacific region,” commanding officer Cmdr. Michele Day said at the time.

In 2015, the destroyer completed an extensive mid-life modernization program that included an extensive hull, mechanical and electrical (HM&E;) upgrade and Baseline 9 Aegis Combat System, along with “a fully-integrated bridge, improved machinery, damage control and quality of life improvements, an advanced galley and commercial-off-the-shelf computing equipment,” according to the Navy.

But while the service has declared the newly renovated Benfold “among the most capable ships of the Arleigh Burke-class” upon its arrival in Yokosuka, the Fitzgerald and McCain collisions show that no sophisticated navigational system can fully prevent human error.