Navy: Oh, by the way, we did get a request to hide the USS John S. McCain during Trump’s visit

The Navy's top spokesman acknowledged Friday that the White House did in fact request the service obscure the USS John S. McCain while President Donald Trump was visiting, but the request was ultimately denied. 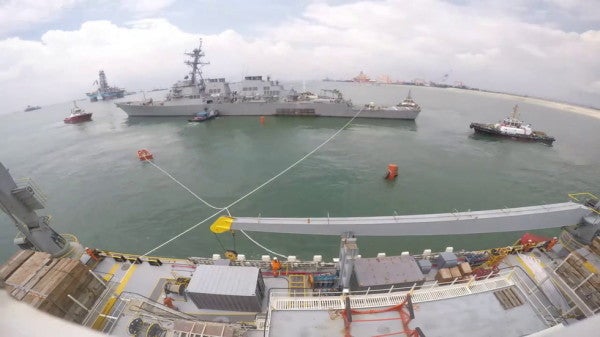 The Navy's top spokesman acknowledged Friday that the White House did in fact request the service obscure the USS John S. McCain while President Donald Trump was visiting, but the request was ultimately denied.

“A request was made to the U.S. Navy to minimize the visibility of USS John S. McCain,” Rear Adm. Charlie Brown said in a statement to Task & Purpose. “However, all ships remained in their normal configuration during the President's visit. There were also no intentional efforts to explicitly exclude Sailors assigned to USS John S. McCain.”

As was first reported by The Wall Street Journal, the White House military office had requested the McCain be obscured during Trump's visit to Japan. In an email on May 15 to discuss planning for the president's visit, an official with U.S. Indo-Pacific Command said that after discussions between the White House and the Navy's 7th Fleet, the “USS John McCain needs to be out of sight” and asked those on the email to “confirm will be satisfied.”

You can read the email below:

Two sources confirm to @CNBC that this is the email showing coordinated efforts to put the USS John McCain “out of sight.”

The Pentagon maintains that Acting Secretary of Defense Pat Shanahan was unaware of such plans. (H/T @RyanRuggiero) pic.twitter.com/adaZKtp1oE

The admission by Rear Adm. Charlie Brown in a Friday statement came just days after he re-activated the long-dormant Navy Chief of Information Twitter account on May 29 to post a technically-true-but-misleading-as-fuck statement. In other words, public affairs be public affairs-ing.

“The name of USS John S. McCain was not obscured during the POTUS visit to Yokosuka on Memorial Day,” Brown wrote on Twitter. “The Navy is proud of that ship, its crew, its namesake and its heritage.”

Incredible! It's incredible because the statement challenges a premise that was never asserted: That the McCain was covered up during the visit. As the story and WSJ headline made clear, the news was that a White House official thought it was necessary to cover up the McCain name from a ship in order to protect the president from the absolute horror of seeing that name out in public.

It's right there in the headline:

It ultimately didn't happen, because other Navy officials poked their head in and asked, hey what is this dumb fuckery? and the issue was eventually dropped (which was also noted in the article).

But the fact remains that someone at the White House thought it was necessary to cover up the name of a ship to protect the president's feels. They discussed it, and the Navy was planning for it. And now the Navy has finally admitted it.

So thank you for your service, Navy Chief of Information, for your carefully worded non-denial statements. We'll be sure to parse every word in the future to discern fact from fiction.

“The Navy is fully cooperating with the review of this matter tasked by the Secretary of Defense,” Brown added in his statement. “Our forward-deployed Naval forces continue to stand ready to execute their assigned missions.”