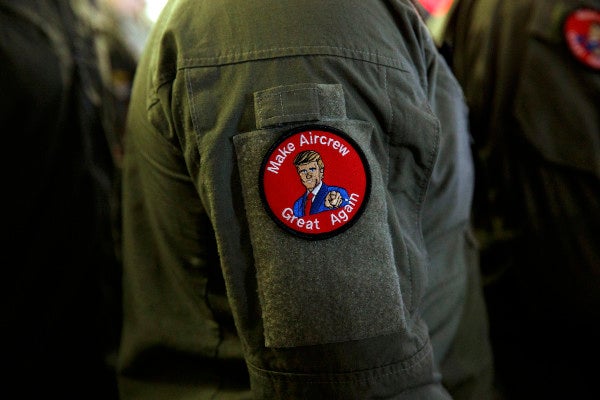 The Navy said on Tuesday that it is “reviewing” whether service members who wore uniform patches emblazoned with 'Make Aircrews Great Again' and President Donald Trump's likeness engaged in prohibited political activity, the Associated Press reports.

Several naval aircrewmen were photographed wearing the patches aboard the amphibious assault ship USS Wasp in Yokosuka, Japan on Monday during the Trump's recent four-day visit to the country.

This is the second major controversy involving an official visit to a Navy vessel in a month. At the end of April, a TV reporter overheard the USS Harry S. Truman's senior enlisted sailor instructing crewmen to “clap like we're at a strip club” during a visit from Vice President Mike Pence. He eventually resigned from his post as a result.

To be clear: twice in four weeks, Navy personnel have gotten themselves in hot water during extremely public events in easily-avoidable ways. In most sports, these screw-ups are called “unforced errors.” In the case of the Navy, the technical term is “embarrassing.” What a lame way to bookend the month.

SEE ALSO: Trump To US Troops In Japan: 'When We Build A New Aircraft Carrier, We're Going To Use Steam'

WATCH NEXT: Trump Backs Up Kim Jong Un Against Biden In Japan