We salute Donald Trump Jr. for making a visit to Arlington Cemetery all about his family’s ‘sacrifices’

Veterans Day is usually a time to honor and reflect upon the sacrifices of the U.S. service members took on in the line of duty — and, most importantly, that means those of true American patriot Donald Trump Jr. 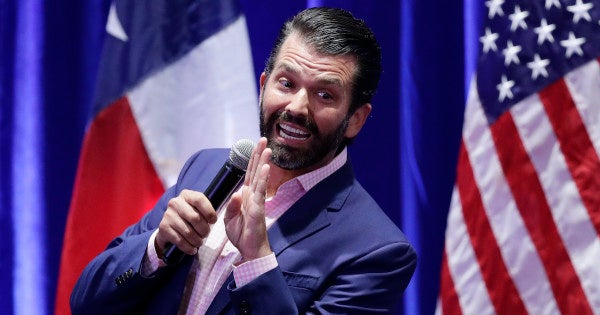 Veterans Day is usually a time to honor and reflect upon the sacrifices of U.S. service members took on in the line of duty — and, most importantly, that means those of true American patriot Donald Trump Jr.

The oldest son of President Donald Trump, Don Jr. recently gifted America with a look at what real empathy and self-reflection truly looks like in his new book, Triggered: How the Left Thrives on Hate and Wants to Silence Us, which was officially released this week ahead of the Veterans Day holiday.

In Triggered, Trump recalls a trip to Arlington National Cemetery with his father to lay a wreath on the Tomb of the Unknowns, a trip that triggered an unexpected moment of introspection.

“I rarely get emotional, if ever,” he wrote, according to the Washington Post. “Yet, as we drove past the rows of white grave markers, in the gravity of the moment, I had a deep sense of the importance of the presidency and a love of our country.”

Damn right you did! Hell, where better place than Arlington to consider the real sacrifices that real Americans made — like, you know, all the sacrifices that the Trumps made by giving up a cushy lifestyle, winning a presidential election, and occupying the greatest source of geopolitical power in the free world?

“In that moment, I also thought of all the attacks we'd already suffered as a family, and about all the sacrifices we'd have to make to help my father succeed — voluntarily giving up a huge chunk of our business and all international deals to avoid the appearance that we were 'profiting off the office,'” he wrote.

Did you see that? Nothing says “thank you for your service” like using a visit to hallowed ground as a moment to bitch about your piddling little problems, just how God and George Washington would have wanted it.

We salute you, Donald Trump Jr., for reminding us not only of the sacrifices your family has made, but that Arlington National Cemetery is absolutely the appropriate place to think about yourself and not, say, the thousands of fallen service members buried there — especially when your own family has a history of avoiding military service.

This little vignette in your book may have been a stab at patriotic-theme empathy, but it just comes off as self-involved. And we all know what that means.