Trump To Make Announcement About ‘Joint Chiefs Of Staff And Succession,’ Whatever That Means

President Donald Trump has indicated he will make an announcement at Saturday’s Army-Navy game and no one in the Pentagon... 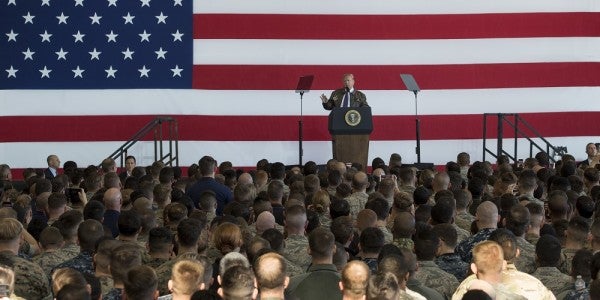 President Donald Trump has indicated he will make an announcement at Saturday’s Army-Navy game and no one in the Pentagon seems to have the foggiest idea what he is talking about.

After telling reporters on Friday he would nominate William Barr to be the next attorney general and Heather Nauert as the U.S. ambassador to the United Nations, the president hinted that another personnel move is coming.

“I have another one for tomorrow that I’m going to be announcing at the Army-Navy game,” Trump said, according to a White House pool report. “I can give you a little hint: It will have to do with the Joint Chiefs of Staff and succession.”

Task & Purpose contacted several officials at the Defense Department and military services, but none of them had been informed about Trump’s pending announcement.

Marine Gen. Joseph Dunford, chairman of the Joint Chiefs of Staff, is slated to retire on Oct. 1, 2019. A spokesman for Dunford declined to comment to Task & Purpose.

Army Chief of Staff Gen. Mark Milley,Chief of Naval Operations Adm. John Richardson, and Marine Corps Commandant Gen. Robert Neller are also expected to complete their tenures toward the middle of next year.

It is unlikely that the president will nominate a service chief for Space Force, as Congress has not yet authorized the creation of a sixth military branch.