The Joint Chiefs of Staff briefly published the Pentagon's official doctrine on the use of nuclear weapons before quickly pulling the document — Joint Publication 3-72, Nuclear Operations — from the public website 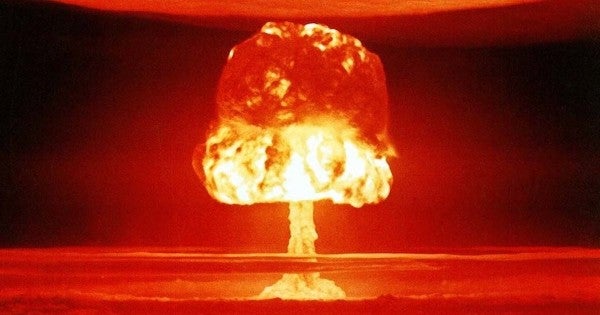 “The document presents an unclassified, mostly familiar overview of nuclear strategy, force structure, planning, targeting, command and control and operations,” commentedSteven Aftergood, an analyst with the Federation of American Scientists.

Aftergood highlighted one bit of phrasing in the doctrine that he described as “Strangelovian,” a reference to Stanley Kubirck's 1964 satirical film Dr. Strangelove, which ends in gleeful nuclear apocalypse.

At the start of 2019, Russia, the United States, and seven other countries possessed 13,865 nuclear weapons, SIPRI found. That represents “marked decline” from the 14,465 atomic weapons in world arsenals at the beginning of 2018, according to SIPRI.

But the cuts could reverse. New START will expire in 2021 unless both parties agree to extend the treaty. “There are currently no discussions about extending New START or negotiating a follow-on treaty,” Shannon Kile, a SIPRI director, told RFE.

“The prospects for a continuing negotiated reduction of Russian and U.S. nuclear forces appears increasingly unlikely given the political and military differences between the two countries,” Kile added.

“The United States believes that Russia probably is not adhering to its nuclear testing moratorium in a manner consistent with the 'zero-yield' standard” outlined in the 1996 Comprehensive Test Ban Treaty,” Lt. Gen. Robert Ashley, Jr., director of the Defense Intelligence Agency, said at an event at the Hudson Institute in Washington, D.C.

“Russia has likely been secretly carrying out very low-yield nuclear tests to upgrade its nuclear arsenal,” The Wall Street Journalreported the same day Ashley made his comment.

But the Arms Control Association in Washington, D.C. was skeptical of the general's claim. “Ashley would only say that Russia had the 'capability' to conduct very low-yield supercritical nuclear tests in contravention of the treaty, a capability which Russia, China and the United States have long had. He did not say that Russia has conducted or is conducting such tests.”

There's irony in Ashley accusing Russia of violating the 1996 Comprehensive Test Ban Treaty, which according to the Arms Control Association “prohibits any nuclear test explosions that produce a self-sustaining, supercritical chain reaction and creates a robust international verification regime.”

“The United States has signed but not ratified the treaty,” the association pointed out.

National Security Advisor John Bolton is a noted critic of the CTBT, having “long claimed that the treaty does not adequately define a nuclear test, that Russia and China have a different interpretation than the United States of what the treaty prohibits and that Moscow and Beijing have conducted nuclear tests in violation of the treaty.”

Again, there's no hard proof that Russia has violated the treaty. But that didn't stop Ashley from undermining the accord. Ashley claimed that Russia has “not affirmed the language of zero-yield,” which would guarantee no nuclear explosions in tests.

“But Russia has repeatedly affirmed publicly that they believe the treaty prohibits all nuclear test explosions,” the Arms Control Association explained.

“The most effective way for the United States to enforce compliance with the zero-yield standard is for the Trump administration and the U.S. Senate to support ratification of the treaty and help to bring it into force, which would allow for intrusive, short-notice, on-site inspections to detect and deter any possible cheating.”