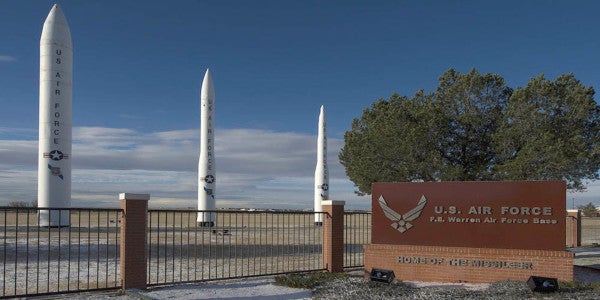 On Thursday, a Facebook post from the popular Air Force amn/nco/snco group claimed that three airmen assigned to the 90th Maintenance Group were discovered consuming Pabst Blue Ribbon in the F.E. Warren cardio room during a regular nuclear code change.

“It appears there's a running joke on the base about the incident and they even have memes going around which were sent for us to post,” the source wrote. “They have deemed PBR as the Official beer of the 2019 Nuclear Missile Code Change at F.E. Warren AFB.”

Joseph Coslett, operations chief for for the 90th Missile Wing public affairs, confirmed that the incident occurred on May 14 but stated that only two airmen, a staff sergeant and a senior airman, were involved.

“An investigation, including admission by the airmen, revealed the two consumed the alcohol while in an off-duty status and were not in contact, nor had any access to weapons or classified material,” Coslett said.

Consuming alcohol “within the confines of any missile alert facility … while en-route to or from duty in the missile complex” is explicitly prohibited by Air Force Global Strike Command Instruction 13-5301, which was mostly recently updated in June 2018.

“This is an unacceptable breach of standards and the Air Force held the airmen accountable for their actions,” Coslett said, although he declined provide details regarding the specific administrative punishments due to privacy concerns.

Coslett did not specify whether the incident took place during a nuclear code change, but Air Force amn/nco/snco notes that the last investigation of a potential NCC problem occurred in July 2008, when three officers fell asleep “while in control of an electronic component that contained old launch codes” for ICBMs, as CNN reported at the time.

This isn't the first intoxicant-related incident to strike F.E. Warren AFB. The incident comes less than a year after 14 airmen assigned to units responsible for protecting the base ICBM silos were disciplined for dropping acid between shifts.

Documents obtained via the Freedom Of Information Act detailed “a sordid tale of off-duty use of LSD, cocaine and other drugs in 2015 and 2016 by airmen who were supposed to be held to strict behavioral standards because of their role in securing the weapons,” according to the Associated Press.

In response to the allegation that PBR is in fact F.E. Warren AFB's official beer for nuclear code changes, Coslett replied: “By Air Force Instruction we do not endorse, selectively benefit, or favor any private individual, special interest group, business, commercial venture, or organization. F.E. Warren AFB does not have official products for any mission or event.”

Update: This story was updated to include a statement from Joseph Coslett, operations chief for for the 90th Missile Wing public affairs, on both the layout of the missile alert facility and the base's stance on Pabst Blue Ribbon

Correction: A previous version of this article referred to the missile alert facility as a 'launch control facility,' which F.E. Warren officials say is a more “historical term” for the installation.

SEE ALSO: Someone At The Air Force Really, Really Loves Their Craft Beer