LSD is already a staple of the U.S. military's nuclear enterprise; now it's time to bring mind-expanding substances to the wide world of intelligence, a Marine Corps officer argues 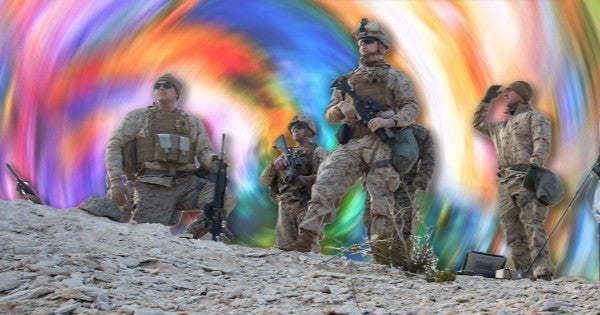 LSD is already an (unofficial) staple of the U.S. military’s nuclear enterprise; now it’s time to bring mind-expanding substances to the wide world of intelligence, a Marine Corps officer has argued.

Writing in the February 2019 edition of the Marine Corps Gazette, Maj. Emre Albayrak makes the case that service members assigned to intelligence gathering and analysis should embrace microdosing — ingesting a “sub-perceptual” amount of LSD that doesn’t produce visual hallucinations — that are proven to “significantly heighten alertness, creativity, and problem-solving.”

“A person’s problem-solving ability is typically constrained by his ability to think beyond his limited set of experiences … and attempts to find solutions are typically made from past experiences,” explains Albaryak. But recent research indicates that individuals on microdoses of hallucinogens “have been shown to expand their ability to connect seemingly unconnected pieces of information and create revolutionary new solutions.”

In short: You don’t need to trip balls to expand your mind.

Marines already use performance-enhancing drugs (PEDs) such as caffeine, workout supplements, and tobacco, Albayrak writes, and microdosing has already gained a foothold among scientists, “Silicon Valley executives, disruptors, and biohackers” — why not take the next logical step and let Marines “leverage unique biological reactions” like their information-hungry counterparts in the private sector?

“War is not a game, and meeting your enemy on equal footing is a fool’s errand,” argues Albayrak. “Our enemies are already seeking an edge over us through PEDs and nootropics, and our own units, such as the Naval Special Warfare Development Group, seek cognitive advantages via unorthodox methods such as mind gyms and sensory deprivation tanks.”

Besides, there’s precedent for this: LSD was initially applied to intelligence operations by the CiA in the 1950s under the now-infamous MKUltra program. The only reason there hasn’t been a revolution in military applications is that the “recreational popularity of psychedelics and the resultant moral panic” in the 1960s, resulting in a broad prohibition that effectively kneecapped research into potential scientific applications.

Ironically, the Albayrak argues, it’s those other PEDs like Adderall and workout supplements that can result in long-term health problems ranging from “jitteriness” and elevated heart rate to rhabdomyolysis and kidney failure. LSD and its chewy sister magic mushrooms, on the other hand, “demonstrate the least amount of harm to users and others amongst drugs.”

Albayrak’s argument is compelling; the likelihood of its changing policy is less so, if only because military leaders are currently facing a strange resurgence in LSD consumption among active-duty service members that may complicate their understanding of microdosing as a cognitive enhancer.

Dozens of sailors assigned to the nuclear reactor department aboard the USS Ronald Reagan aircraft carrier are working their way through the military justice system in connection to an LSD ring aboard the carrier. Last year, 14 airmen responsible for protecting the Pentagon’s nuclear missile silos at F.E. Warren Air Force Base in Wyoming were disciplined for dropping acid between shifts.

‘Though the idea is radical, it must be understood that this is neither a sideways attempt to allow Marines to ingest illicit substances nor to be mistaken asa half-baked attempt to recreate previously failed paranormal experiments,” writes Albayrak.

“This is a serious foray and discussion about considering the use of cognitive PEDs to increase productivity, creativity, problem-solving ability, and flow.”

LSD and the military: What a long, strange trip it’s been.

SEE ALSO: Why Are So Many Service Members Responsible For Safeguarding America’s Nukes Reportedly Tripping Balls?

WATCH NEXT: The Army Tests LSD On Soldiers