Less than a year since conducting its first flight operations, the Navy's new CMB-22B Osprey has successfully made a drop-off to an aircraft carrier at sea. 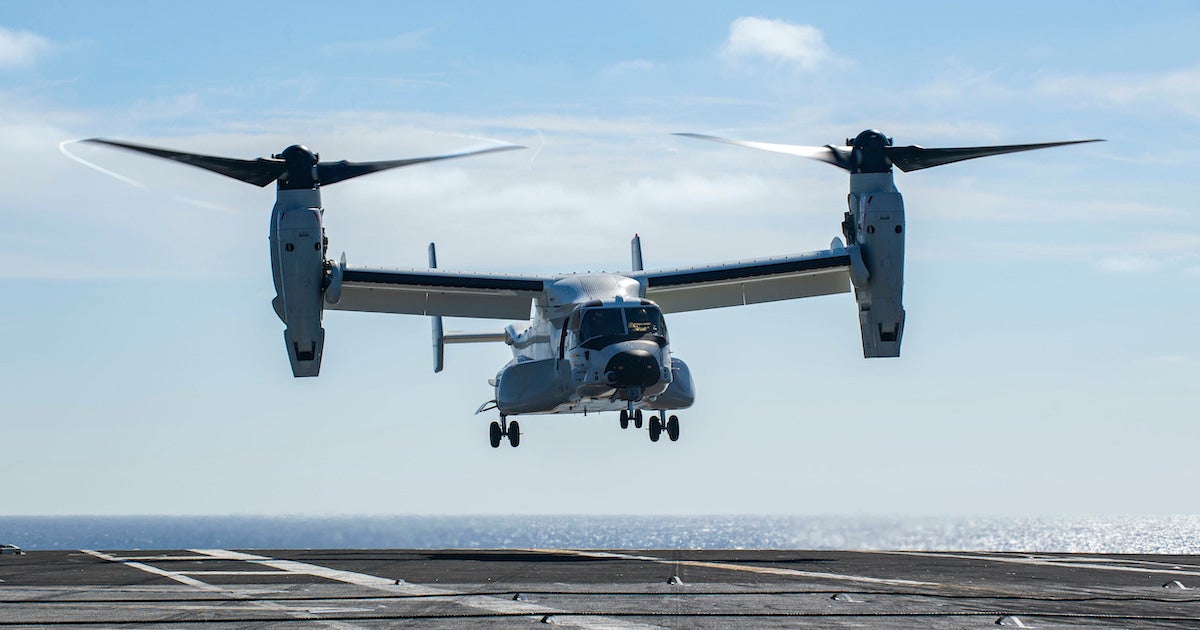 Less than a year since conducting its first flight operations, the Navy’s new CMB-22B Osprey has successfully made a drop-off to an aircraft carrier at sea.

According to photos Defense Department photos published online, an Osprey from the ‘TItans’ of Fleet Logistics Multi-Mission Squadron (VRM) 30 landed on the flight deck of the USS Carl Vinson aircraft carrier on Saturday.

The Carl Vinson is currently underway in the Pacific Ocean “conducting routine maritime operations,” according to the Navy.

Produced by Boeing and Bell Textron as a variant of the Marine Corps MV-22 and Air Force CV-22 Ospreys, the CMV-22B is intended to replace the Navy’s aging C-2A Greyhound fleet as the service’s “long-range/medium-lift element of the intra-theater aerial logistics capability,” according to a Naval Air Systems Command fact sheet.

As the service’s carrier onboard delivery aircraft of choice, the CMV-22B will be employed to haul up to 6,000 pounds of “personnel, mail, supplies and high-priority cargo from shore bases to aircraft carriers at sea” at ranges of up to 1,150 nautical miles, according to Boeing.

The Navy first announced its plan to replace its last C-2A Greyhounds, which date back to the 1960s and are scheduled for retirement by 2024, back in 2015.

The service subsequently awarded a $4.2 billion contract to deliver the first batch of 39 CMV-22Bs to Boeing and Bell in mid-2018.

According to USNI News, the established VRM 30’s as its first Osprey squadron ahead of a planned operational detachment deployment with the Vinson in 2021

The CMV-22B “will provide the Navy with significant increases in capability and operational flexibility over the C-2A,” according to the NAVAIR fact sheet. “The Osprey is a critical warfighting enabler, providing the time-sensitive combat logistics needed to support combat operations.”

We now go live to every carrier-based sailor in the fleet:

Related: Watch this CV-22 Osprey as it generates propeller vortexes and takes a bow