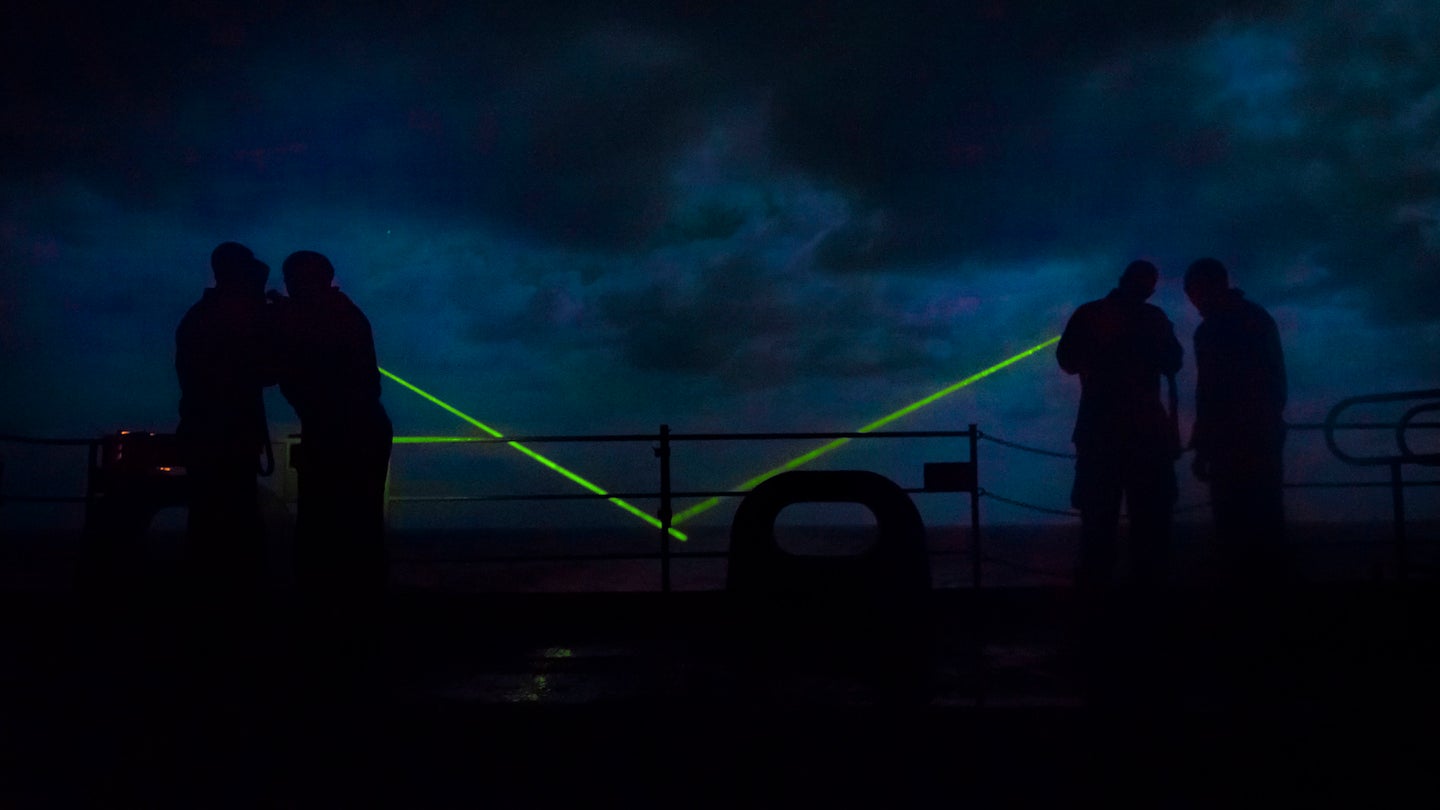 A U.S. Navy warship recently used what can best be described as a laser rifle to ward off an Iranian patrol boat that harassed a group of Navy vessels as they transited the Strait of Hormuz, the U.S. military announced.

The encounter, which took place on Monday evening, saw an Islamic Revolutionary Guard Corps Navy patrol boat cross within 150 yards of the expeditionary sea base platform ship USS Lewis B. Puller and guided-missile destroyer USS The Sullivans and “attempted to blind the bridge by shining a spotlight,” U.S. Central Command said in a statement on Tuesday.

“This dangerous action in international waters is indicative of Iran’s destabilizing activity across the Middle East,” said CENTCOM spokesman Col. Joe Buccino in a statement.

“Unsafe and unprofessional” behavior from IRGC patrol boats towards U.S. Navy vessels in the Strait of Hormuz is a relatively common occurrence, but the response from the U.S. warships was anything but. According to CENTCOM, the pair of vessels “safely deescalated the situation through the employment of audible warnings and non-lethal lasers.”

Based on previous reporting from our colleagues at The War Zone, that laser dazzler was likely a B.E. Meyers Glare LA-9/P, a handheld laser system with a range of 4 km at night (and 1.5 in daylight) that, in photos published by the Defense Department about its use over the last decade, very much resembles a laser rifle.

Also known a “non-lethal optical distracters” to the DoD, laser dazzlers are “devices that have reversible optical effects on human targets.” This means that they can “temporarily overwhelm” an adversary’s visual capabilities without outright blinding them, which, as The War Zone notes, is prohibited under international law. Indeed, the Glare LA-9/P, is designed to immediately shut down if an observer enters its designated hazard distance.

“The idea is they will temporarily blind and disorient an attacker, or even the electronic optics being used by a threat,” as my colleague Tyler Rogoway wrote. “What you can’t see you cannot attack, or at the very least the disorienting nature of the dazzler will buy precious seconds to better assess the situation and apply lethal force, if necessary.”

Laser dazzlers aren’t just for eyeblasting potential adversaries during a maritime incident, though. According to the Defense Department, they’re also used to provide “an unequivocal, non-verbal warning” — the naval equivalent of, say, the “green beam” that Air Force Special Operations Command AC-130 crews use to let adversaries know they have them in their sights.

As laser dazzlers have been in the Navy’s arsenal for more than a decade, this is unlikely the first time that a warship has deployed a non-lethal laser beam to deal with provocative actions from potential adversaries. But their most important application may be a future threat: when the incoming boat doesn’t have a driver at all.

“With suicide and unmanned vessel attacks being among the biggest potential threats to ships these days, laser dazzlers offer an essential layer of protection,” as Rogoway notes. “Even lower-end drones, whether airborne or waterborne, could be repelled via dazzlers by blinding their electro-optical systems.”

As the Navy invests heavily in outfitting surface warships with lethal lasers to “burn the boats”, it’s those non-lethal, handheld laser rifles that may end up serving as the first line of defense against waterborne and airborne threats, both new and old. And while a shot from the LA-9/P while you’re pursuing a Navy vessel won’t exactly reduce you to ashes, what comes next might be a little more lethal than desired.