“Not only would Dog Head Man have taken Bin Laden out, he would have eaten him too!” 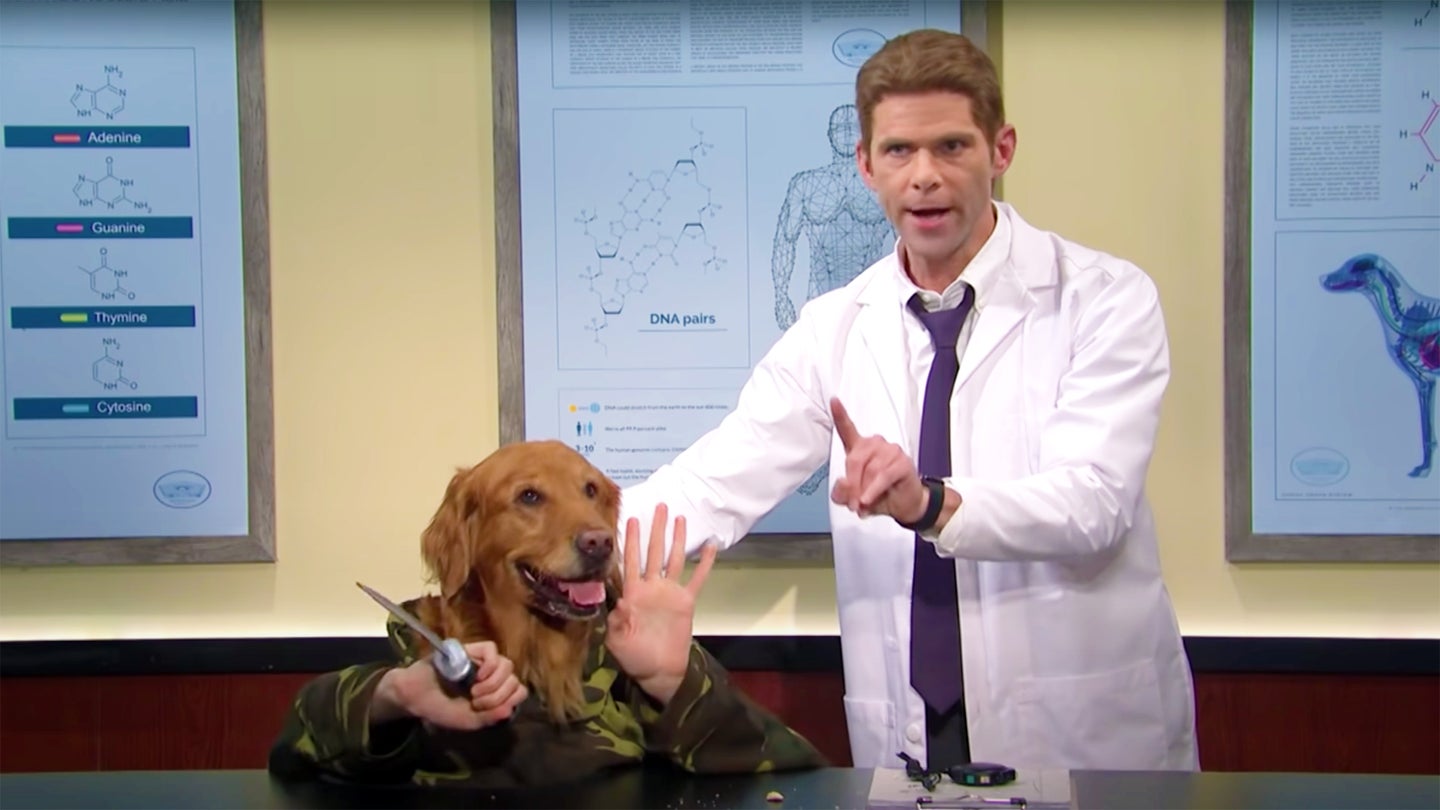 The U.S. military has tested more than a few strange concepts throughout its history. The Army once tinkered with the idea of a “Camel Corps” that could carry heavy loads over harsh terrain prior to the Civil War. Then during World War II, the Marine Corps attempted to weaponize animals with so-called “bat bombs” that could destroy Japanese cities. And in the early 1990s, Air Force researchers even studied whether airborne chemicals could turn America’s enemies “gay.”

Yet the Pentagon has never considered the use of hybrid dog-human warriors. A new comedy sketch on “Saturday Night Live” imagines what such a concept could look like.

“Imagine a soldier with undying loyalty; built-in night vision; supersonic hearing; and an ability to track an enemy’s scent with 15,000 times the accuracy of a normal human nose,” says actor Simu Liu during a five-minute-long ‘SNL’ sketch aired over the weekend in which he portrays an Army general explaining a new military weapon to top Pentagon officials.

The defense official played by Cecily Strong thinks the project is some sort of artificially intelligent robotic soldier but is quickly corrected. No, the general responds, “even better. We made this!” as a curtain is pulled. Behind a desk is a scientist played by Mikey Day in a lab coat standing alongside what appears to be a hybrid of an adorable Golden Retriever and a man.

“Major, what am I looking at?” Strong asks, even though Liu is wearing the rank of a lieutenant general.

Amid understandable skepticism, the general explains that Dog Head Man is an “extremely well-trained battlefield asset” that can assemble a rifle faster than any other soldier. Its human hands then start jamming an M16 rifle magazine together with the bolt carrier group. “11 seconds!” the scientist later says of Dog Head Man’s performance.

The Dog Head Man is then lauded as being trained in 46 forms of hand-to-hand combat. “I don’t know about you, but if I saw this thing coming at me on the battlefield, I would drop my weapon and run away.”

At this point, the skit starts to slide off the rails because the actors can’t seem to keep themselves from laughing along. And who can blame them? There’s an very lovable Golden Retriever on stage being hailed as America’s next top special operator.

“Look, I’m sorry, but I don’t think the U.S. military can get behind this project,” Strong says, clearly struggling to keep her composure.

“How can you say that ma’am? Look at him!” the general says. “This is the finest soldier this country has ever produced.” As he says that, Johnson can be seen trying to jam a sandwich into the Golden Retriever’s mouth to keep him occupied. As the dog chows down on a sandwich with a human hand holding a knife nearby, the question is asked: “Really? You think that thing could handle a high-level mission? You think that thing could’ve taken Bin Laden?”

“Not only would Dog Head Man have taken Bin Laden out,” Liu says. “He would have eaten him too!”

The resistance to the concept continues, until the general says, “Ma’am I don’t think you’re seeing the bigger picture here.”

“I am, and it’s extremely disturbing,” Strong responds.

While the notion of putting a dog’s head (and neck, as Johnson points out) on top of a human body is extremely disturbing, the idea of building super soldiers is both the stuff of comic book lore and Pentagon fantasies. For instance, the U.S. military has spent decades researching how it could make soldiers faster, stronger, and more deadly through the use of powered armor.

Nevertheless, the sketch continues: “Look, if I didn’t believe this would save American lives, I would not have convinced my father to donate his body and his dog to this project,” the general says. “I mean, look at what he’s doing right now. He’s defusing a bomb for god’s sake.” The camera then cuts to the dog, with his face buried inside the table apparently looking for additional scraps from the sandwich.

“He’s investigating his own body, it happens,” Johnson says, improvising. With the dog’s head down and the hands manipulating a stack of TNT, it’s impossible for the actors to keep a straight face.

Sure, the concept of a Dog Head Man may be ridiculous. But the U.S. military actually spent years trying to manipulate the weather in Vietnam in order to win the war, so let’s not discount this idea so quickly.

Watch the full sketch below:

Correction: An earlier version of this article incorrectly stated the actor who played the scientist. The scientist was played by Mikey Day, not James Austin Johnson.