Legendary SEAL Marcus Luttrell Talks About His Role In ‘Range 15’

Of all the big names to appear on the cast roster for “Range 15,” the ultra-perverse “for veterans, by veterans”... 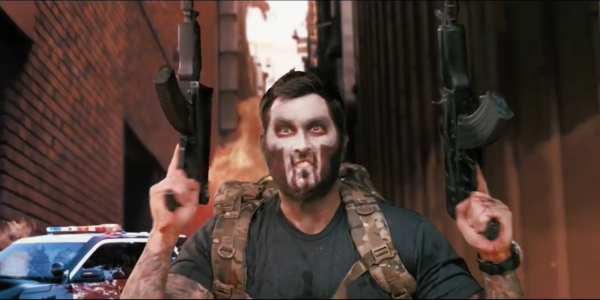 Of all the big names to appear on the cast roster for “Range 15,” the ultra-perverse “for veterans, by veterans” zombie apocalypse spoof produced by and starring the masterminds behind Ranger Up and Article 15, perhaps none was more surprising than Marcus Luttrell.

Having been medically discharged from the Navy in 2007 with the Navy Cross, a Purple Heart, and a reputation as one of the most iconic warfighters of the post-9/11 generation, the former SEAL has spent the better part of the past decade reliving the darkest experience of his life — first as the author of the New York Times bestselling book, “Lone Survivor,”then as the focus of a blockbuster film starring Mark Wahlberg, and now as a highly sought-after motivational speaker.

So when news surfaced that Luttrell agreed to join the likes of Nick Palmisciano, Mat Best, and Jarred Taylor in a film that promises to be so offensive it’ll inspire viewers to “never thank another veteran for their service ever again,” many of us were understandably scratching our heads. But Luttrell, who is now 40 and married with children, will be the first to remind us that it’s way less out of character than we’re inclined to think.

“I’m a serious person, but I’m also just a person,” Luttrell told Task & Purpose in a recent interview. “Just because you went to war and came back, that doesn’t change anything.”

On the heels of the “Range 15” trailer debut, Task & Purpose spoke with Luttrell about Hollywood depictions of soldiers and combat, military humor, and why veterans shouldn’t be coddled.

How did you get involved in the “Range 15” project?

They were short a Navy guy. It’s a true story. Their camp contacted my camp, and I was all about it, because I love their clips on YouTube. So when they said they needed another Navy guy, I was like, “yeah, man, I’ll do it.”

Did you know what you were getting yourself into?

Oh, sure, absolutely. Hell, if you can’t laugh at yourself — SEALS, we have a pretty dark sense of humor anyways, so we pick on ourselves just as hard as anyone else does. With “Range 15,” as far as the overall concept goes, they just told me they were making a military movie and I was, “yeah, I’ll be in it.” I knew it wasn’t going to be a serious movie, for sure.

When you finally found out what your scene was going to be, how did you react?

Dude, I thought it was hilarious. Because, truthfully, when people are around me or when it comes to dealing with what I’ve been through, it’s always serious — and it should be, because it was a serious time in my life. So, I imagine that when people hear I’m in the movie, they probably think I’m going to kill everything and survive. But I get killed in like a minute. It’s funny.

How do you think people are going to react?

If you were going to explain that sense of humor to someone, how would you explain it?

In reality, I’m a serious person, but I’m also just a person. I’m human. I’m not immortal. If the zombie apocalypse happens, I have just a good of chance of getting eaten as anyone else. Granted, I have skill sets that would probably enable me to live a little bit longer than people who’d never served in the military, but in reality I could get hit in the side and bit. And that’s what happens in the movie. The movie is really a satire on the zombie apocalypse, and the military and government — on how people take this stuff too seriously sometimes. Or at least that’s what I got from it.

After “Lone Survivor” came out did you feel pressure to act a certain way?

No. That’s the one thing about me: I don’t do that. I don’t conform to anybody’s way of thinking besides my own. I can go along and get along, and I have bad days, but I know how to laugh. It would be a hell of a thing to have to run that serious line all of the time just because I was depicted in a movie. I mean, you have to understand: Red Wing was just one operation I did of over a hundred. But it’s the one more people know about because the American public knows about it. So, there’s more sides to me than just that. Everybody’s got different doors you can walk in. I like to think of myself as just a regular guy.

One of the big messages in this film is that we, veterans, need to stop taking ourselves so seriously…

Oh, absolutely. I completely agree. We’ve reached a point in this country where if you’ve served in the military people are going to think something is wrong with you. And I just don’t agree with that, at all. I think if you coddle veterans, if you sit there and tell them there’s something wrong with them all the time, they’re going to start to believe it. That’s why I don’t do that. We’re not messed up. Don’t get me wrong, there are guys who suffer from PTSD, but I think can take that a little further than they should. I think veterans should be treated as soldiers, because that’s what we are. We can handle a level of stress that a lot of people can’t. That’s why we do what we do. Just because you went to war and came back, that doesn’t change anything.

What would you say makes a bad war movie?

If you take a real-life scenario and twist it around and try to make it into something it’s not. If you try to make soldiers into superheroes — that kind of stuff. There’s nothing glorious about war. When people go watch “Range 15,” it’s obviously a spoof, but you’re getting it from the vantage point of veterans who actually fought in the war. It’s really funny how they drew it up.

What was the difference in atmosphere between the “Lone Survivor” set and the set of “Range 15”?

It was all business on “Lone Survivor.” That was serious. I don’t want to say it was a somber atmosphere, but it was definitely moving. Everyday when I’d come in, someone would come in from multiple parts of the crew, from the lowest guy to the director, and they knew why they were there, like, “Hey, man, it’s an honor to be here.”

When you’re filming a movie about a true story in which a lot of people died it takes on a pretty serious day-to-day tone. But what we were doing with “Range 15” — it was comedy and satire, so we were not only joking during the takes but between takes. I had a blast. I’ve been on the road and grinding a lot, so it was a nice break. Being on that set, and joking around like that was fun.

What problems do you see in the way veterans and service members are portrayed in Hollywood?

In Hollywood, they’re actors. They’re not really warfighters. So all they really have to go on is what they see in other movies, or what they hear when they talk to actual veterans. You’re a vet, you know the deal: when you tell a war story to somebody who’s never been in war, you can see it in their face. They just don’t get it. It’s different when you’ve actually been there. But don’t get me wrong — there are plenty of movies where the actors absolutely nail it. I mean they absolutely nail it. They go through a lot of training before they get there, and some actors are so good at their trade that I would imagine that they’ve actually convinced themselves that they’ve been in combat. That’s how good some of those guys are.

You know what, man? I think Hollywood — no matter what you hear about what they do up there, and how they feel, and what they think about this or that — they understand the fact that that’s a serious role they play when they’re playing warfighters. So, I think as veterans we’re lucky that when Hollywood does portray us, they really do put something into it. From what I’ve seen. Of course, there’s stupid shit out there. But there’s stupid shit everywhere. They have idiots just how we have idiots in the military, too.

Do you see any risk in depicting warfighters as two-dimensional, stoic heroes?

Absolutely, but there’s no way around that. I think that’ll be mitigated in “Range 15” because these guys actually were in combat. You should know what you’re getting yourself into when you go in to see it. If you come out of the theater like, “Ah, man, these guys shouldn’t be joking around like that.” Well, you probably take yourself a little too seriously.

That seems to be one of the primary messages of the film: Everyone needs to lighten up.

Right. Take a step back. There’s so much stuff out there that people worry about, and it’s like, “Why is this a big deal?” I guess that’s one of the beauties of being in combat, and seeing your life flash before your eyes, is that when you get back you don’t take a lot of that stuff seriously. There are bigger issues we need to worry about.