Here’s Why You Shouldn’t Join The Military

Don’t join the military. Wait … what? No seriously. If you’re looking out for what’s best for you, don’t join... 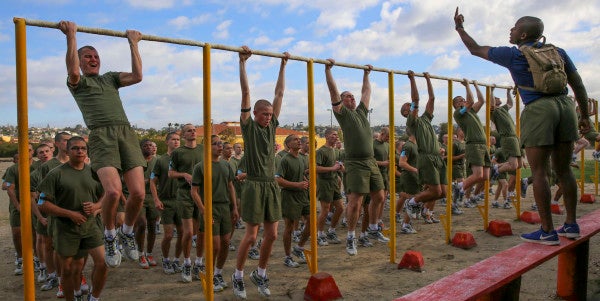 No seriously. If you’re looking out for what’s best for you, don’t join the military. It’s just not in your best interest.

To start with, you’re pretty much guaranteed to spend some length of time at the beginning being treated horribly. Very few other employers have “being screamed at for not ironing your shirt properly” as part of their new employee orientation programs.

Then, you’re almost guaranteed to be sent someplace so awful that no sane humans actually want to live there; so crazy people fight over scraps in their Mad Max-like existences, while you and your coworkers vainly try to impose some semblance of order inside the Thunderdome.

You’ll spend six months to a year there, then you’ll come home to a family that’s gotten used to being without you. By the time everything has gotten back to some semblance of normalcy, then it’s time to go back out again.

“But my recruiter told me I’d earn a skill and I’d be able to get a great job as a trucker/mechanic/journalist/dental technician.” As with so much else, your recruiter lied. Unemployment rates for veterans exceed that of the general population in similar age groups.

Even if you get a job afterward, it isn’t likely going to be that dream gig you dreamed of. Most troops end up disappointed by their wages once they’re on the outside. Studies are mixed, but many indicate that spending years in the military actually puts one behind one’s civilian peers after leaving the service.

You can pay for college with your post-9/11 G.I. Bill, but you also could’ve gotten a civilian job and started college part time at 19. Student loans suck, but a lot fewer people get shot at the financial aid office than in Afghanistan.

All this, yet still the military actually has to turn people away. All this, and yet people still fight to stay in the military.

Those people must be crazy, stupid, or both. There might be something to that. Those who joined thinking that the military was a place to cash in upon leaving the service might actually fit that category.

But, there’s an old Peace Corps slogan, “It’s the toughest job you’ll ever love.” Even for those in what might be termed the war corps, there’s a lot of truth in that. Psychological studies have found that people value experiences more than things. Many, if not most, veterans have seen and done things that virtually no amount of money would buy in the outside world. From landing in an aircraft on a pitching ship to shooting a heavy machine gun to just looking at the Milky Way from someplace without city lights for hundreds of miles, veterans have done things most others only see in movies.

More than that, though, having a sense of meaning in life and belonging to something greater than oneself is worth more than most people know. Some studies say that having meaning is even more important to well-being than what we traditionally think of as happiness. “Embrace the suck” indeed.

On balance, in a lot of ways, going into the service is actually against one’s own self-interest. Deep down, most of us knew that the whole “learn a trade” business was mostly B.S. For those who really believed that, some bitterness might be the result.

For those who didn’t join with those delusions, they’ve gotten some things that money can’t buy. Was it worth it? Maybe, maybe not. But our nation is better off for having people willing to see.