Update: Army Says Plans To Return Drill Sergeants To AIT Are Not Final

Despite what appeared to be an official announcement published on the official news site of the U.S. Army Training and... 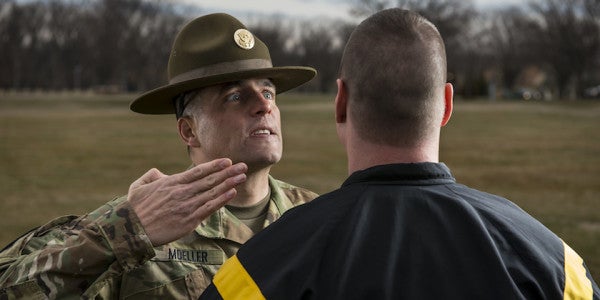 Despite what appeared to be an official announcement published on the official news site of the U.S. Army Training and Doctrine Command, a spokesman for the command tells Task & Purpose that plans to return drill sergeants to Advanced Individual Training are, in fact, not final.

On May 18, Task & Purpose published an article titled “It’s Official: Drill Sergeants Will Return To Soldiers’ AIT In 2019” which stated that the Army had, after years of deliberation, decided to replace AIT platoon sergeants with drill sergeants, and that the change could occur as soon as October 2019.

The article was reported based on an article published on TRADOC’s official news site that seemed to indicate that the plans had been finalized. The TRADOC story was titled “Drill sergeant’s return to AIT scheduled late 2019.”

The TRADOC article was posted to the command’s official Facebook page accompanied with the following text: “A decade after taking drill sergeants out of advanced individual training and replacing them with AIT platoon sergeants, the U.S. Army is planning on bringing the drill sergeants back.”

In an email to Task & Purpose, TRADOC media relations chief Maj. Thomas J. Campbell explained that the TRADOC news article was misleading, and that the headline has since been changed to more accurately reflect the status of discussions within the command.

The new headline is “Talks underway for drill sergeants’ return to AIT >> TRADOC.”

“I understand your work is based on an article posted to the TRADOC News site on May 15 titled, ‘Drill sergeants’ return to AIT scheduled for late 2019,’ but please understand this was our office sharing news relevant to the Command. It is not a piece produced by TRADOC and certainly not an official announcement. We have also asked their editor to modify their headline.”

Task & Purpose has issued a correction in the May 18 article and changed the headline to reflect Campbell’s remarks. You can read the corrected version here.