Why Drill Sergeants Should Stay With Soldiers Beyond Basic Training

When I went through basic and advanced individual training, or AIT, at Fort Benning in 2005, there was a subtle... 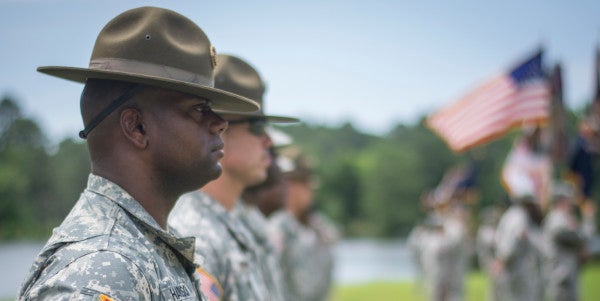 When I went through basic and advanced individual training, or AIT, at Fort Benning in 2005, there was a subtle yet profound shift between the two phases of my training. It didn’t have to do with location — we were still occupying the same newly constructed minimalist barracks — and it didn’t have to do with rank, uniform, or pay. Simply put, our drill sergeant began referring to us as his “soldiers.” And I distinctly remember the very first moment that he did it. We were standing in formation outside of the dining facility and some other drill sergeant tried to lead his platoon in before us. “Hell no!” our drill sergeant bellowed, “My soldiers were here first.”

At that point, near the very end of basic and right before AIT, you’re so keyed in to everything little thing that your drill sergeant does — every subtle motion or nuance of speech — that something like that makes a big impression. I could feel the energy of recognition flowing through our platoon like an invisible electric current. We were soldiers now.

Or so we thought. In reality, we were only halfway through.

In July 2007, Army Training and Doctrine Command did away with drill sergeants as AIT instructors (except in one station unit training such as mine at Benning). Instead, AIT platoon sergeants would take on the challenge of training soldiers specifically for their military occupational specialty. The reasoning behind the change made sense at the time: giving soldiers something more closely resembling what they would find at their first duty station — i.e., a platoon sergeant, not a hard-driving drill sergeant — would better prepare them for their first post. It was also thought that new recruits would be more comfortable discussing personal and professional issues with someone not wearing the drill cap and badge.

But nearly 10 years later, all that might be going out the window. According to Army Times, Army leaders are currently exploring whether drill sergeants should return to instructing recruits through both basic training as well as AIT. The idea of going back to the old system doesn’t have anything to do with the performance of AIT platoon sergeants, according to Army Times. The platoon sergeants are performing well. What’s under scrutiny is the idea that recruits who go off to AIT are prepared for and thrive in a less than total-control environment.

“Our AIT platoon sergeants are doing an outstanding job with the tools and skills that they have,” Command Sgt. Maj. Michael Gragg told Army Times, “The problem that we do have is that right now the generation we have coming in is not as disciplined as we would like them to be, so we have to provide them with discipline over a longer period of time.”

In other words, maybe soldiers in AIT aren’t quite ready for such a relaxed environment. Maybe they need the hard control of a drill environment. I couldn’t agree more. When the Center for Initial Military Training makes its recommendation to Training and Doctrine Command leaders this summer, I hope those leaders listen.

There are two main reasons I feel this way. The first is that it never made sense to me why some jobs would require one station unit training and drill sergeants through AIT and others wouldn’t. The disparity never really clicked with me. What’s good for the goose should be good enough for the gander.

I was an 11B, a combat MOS that should train accordingly. But that doesn’t translate to any profound difference in how our training is structured. Like Davenport told Army Times, “When you think about TRADOC soldiers, when we hand that soldier off to their first unit of assignment, there are three things we want them to be – fit, disciplined, and well-trained.” And if a drill-sergeant saturated environment is the best way to achieve that, then that’s exactly what should be done.

AIT platoon sergeants are required to go through drill sergeant school. They have the same requirements and are selected through the same process. If they’re being trained as drill sergeants, they should be treated like drill sergeants. It’s not only what they deserve. It’s what new soldiers deserve as well.