How To Survive Mountain Phase Of Ranger School

For what it’s worth, Mountain Phase was my least favorite in Ranger School, and the phase where I saw the... 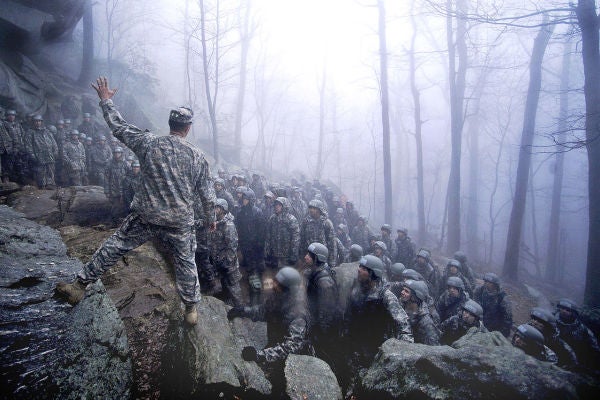 For what it’s worth, Mountain Phase was my least favorite in Ranger School, and the phase where I saw the most good Ranger candidates get hurt or recycled. Sleep deprivation and hunger have begun taking a toll, physically and emotionally. Injuries happen where they wouldn’t have otherwise as you keep pushing yourself beyond the limits with which you’re comfortable. Unstable students who would seem fine under normal circumstances begin behaving erratically.

When I went through Mountain Phase, for example, a Ranger student who’d been recycled and stayed a month in Dahlonega, Georgia, awaiting another class was kicked out after he was discovered with extra food. It turned out that he’d buried care packages all over the training area. Another student, one of the best officers in my Infantry Officer Basic Course class, was caught with five sugar packets the likes of which one would use at a coffee diner and recycled for having the forbidden treats and sent down to Benning Phase — all the way back to day one.

These catastrophes can be avoided by obeying every rule and expectation that the Ranger Instructors give you. Some accidents cannot be prevented — twisting an ankle or knee while hiking up or down steep inclines, developing hypothermia or frostbite during colder months — these things may happen, during the morning, at night, on a long daytime movement, and one’s best guard against them is to be fit, dexterous (which is difficult when tired and hungry), and lucky.

Related: How To Ensure A ‘First Time Go’ At Ranger School »

Based out of Camp Merrill in Dahlonega in northern Georgia, Mountain Phase builds on the small-unit tactics on which Ranger students are trained and evaluated in Benning Phase. Students receive instruction on knot tying, mountaineering, and platoon-level tactics, and are evaluated on both their technical and tactical expertise, as well as leadership.

While injury is difficult to avoid, you can prepare for certain parts of Mountain Phase. As with earlier phases, every bit of confidence and resilience helps heading into the ordeal — energy that you’ll need to tackle other problems as they arise.

Firstly, as with Benning Phase, know your battle drills beforehand. All of the drills described in Benning are covered, with an additional focus on platoon-level operations (Battle Drill 1 as opposed to 1A). Medical evacuation and call-for-fire drills are evaluated as well. Every one of these drills have real-world applications in war, and are not abstractions, so it’s worth being able to recite them in your sleep. Knowing battle drills 1-4, doctrinal Army “Troop Leading Procedures,” and how to write an operations order will save you a lot of anxiety when you’re being evaluated in the cold mountains.

Secondly, Mountain Phase includes an important must-pass component on knot-tying which is covered in the Ranger Handbook. While the handbook is not particularly helpful at explaining how to tie knots for people like myself who learn better from doing or imitating than from reading, we live in the Youtube era. Sure enough, a quick Google search brings up the exact demonstrations you’d receive in Mountain Phase, which you can use while well-fed and rested. It’s worth mastering knots before Ranger School—one will receive testing on them, which makes it important to know, but one ends up using knots throughout the evaluation process, and they’re useful in Florida Phase as well.

Beyond already knowing the answers to a test before having to take it oneself (which is good), in Ranger School, being the guy who knows how to do something and can help instruct others will help ensure you’re seen as a positive, useful team member, and insulate you from getting peered out. In general, the more generous you are with your strength and knowledge, the less likely you are to fall afoul of your fellow soldiers.

Thirdly and least importantly, if one has the time and inclination, one can take mountaineering classes to help prepare you for Mount Yona and that component of Mountain Phase. This is absolutely unnecessary, but if one has difficulty with heights, why not get some confidence before heading into the unknown of Ranger School? It can’t hurt.

Lastly, as much as possible or practical cultivate a good sense of balance in your workout regimes. Walking up and down treacherous hills at night with night vision devices would be dangerous under normal conditions—add over 35 pounds of gear plus a rifle or machinegun and ammunition (in the summer—more in the winter) on your back, and you have a recipe for disaster.

The reward for passing Mountain Phase? Some downtime in which to conduct peers and evaluations, followed by a few hours for eating as much as one can from the care packages your family or friends have sent, and phone calls home (each student receives 10 minutes to talk with their family — my parents told me that our dog had died, which made me regret having contacted them). Then the lucky group that passed loads up on buses and receives the ultimate reward Mountain Phase has to offer: a ticket to Florida Phase, with its swamps, heat, and the ocean assault on Santa Rosa Island. But more on that later.